Dubbed Durham Academy's "Mount Rushmore squad," 11th-graders Luke Triplett and Christopher Chaves and eighth-graders Arya Kumar and Pete Crowley represent the four highest-rated DA chess players of all time. The team finished near the top of its division in the 53rd National High School Chess Championship in Schaumburg, Illinois, March 15–17. The spring nationals event is the largest and most prestigious national scholastic tournament, featuring the nation’s top chess players and recognizing both individual and team efforts at multiple rating levels. A total of 1,514 players representing 281 teams competed in six divisions based upon national rankings.

DA’s team competed in the K-12 Championship Division, the highest, top-ranked and toughest division, with the nation’s top 44 high school teams competing, and featuring mostly students with ratings above 1900.

“This division included International Grandmaster Nicholas Checha from New York City as the overall No. 1 seed, along with 47 other players ranked as Masters and above, and a total of 94 players ranked above Candidate Masters,” said DA chess coach Craig Jones. “This field was stronger than many country's national (non-scholastic) championships. To just compete at this level represents huge success. Durham Academy didn't just show up, didn't just compete, they finished near the top, among some of the strongest teams ever fielded. I just want everyone to realize how tough this event is and how remarkably the DA players performed!”

DA finished tied for seventh among 44 teams and finished eighth on tie-breakers, scoring 17 points out of a possible 28 and finishing just 4 points off the winning team’s score of 21. Kumar tied for 18th individually, Triplett tied for 41st, Crowley tied for 76th, and Chaves tied for 134th. In the K-12 Blitz section, Kumar tied for 63rd. 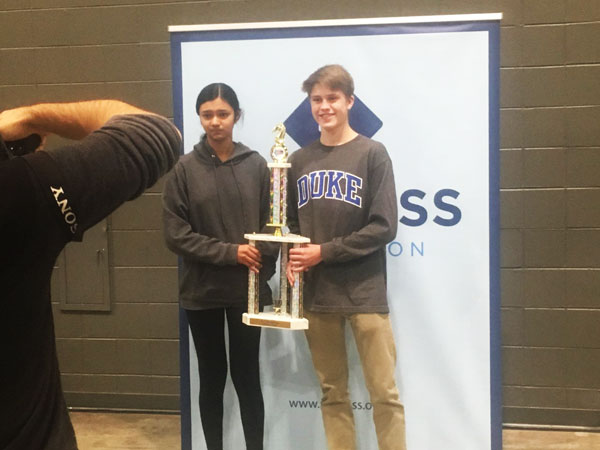 “DA's top finish required all to perform at or above their level to have a top finish, and all four did.” Jones said. “This result ranks among the best ever by a DA team — it was that impressive! If I had to rank them, I would rank this as the second-best team performance we have ever had. To top it off, the few teams that finished ahead of us were stacked with much higher-ranked players, and in general much larger teams, giving them added flexibility.”
See a full list of the final standings here and highlights provided by Jones below.

Arya Kumar (grade 8) was the top DA performer. This is a brilliant performance by DA's all-time No. 1-ranked chess player. Arya scored an upset in the last round, defeating recently minted National Master and Maryland State K-12 Champion Jason Daniels in the last round, giving the team a huge team point. In the first round, Arya went toe-to-toe with the nation’s 15th overall seed, Justin Paul of Thomas Jefferson High in Fairfax County, Virginia, and was near victory but ran into severe time issues and dropped a heartbreaker. But Arya snapped right back and went on to score 5–1 in her last six games!

Pete Crowley (grade 8) also had an outstanding result. Pete scored a huge last round upset, adding precious team points at the most important time imaginable. Pete struggled a little early on but finished with a powerful 2.5/3 to sprint across the finish line. It’s hard to recoup in chess after a tough game, but Pete did it. It should be noted Pete and Arya are "mere" eighth-graders competing in the very top high school division. Pete is like many kids who go through periods early on where it’s so tough moving up, they just feel like moving on. It’s the norm. Pete has kept his foot in the game and shows signs of a second renaissance. Young Pete put together the greatest run in North Carolina elementary history, winning so many state championship titles that I lost count. He remains only one of two DA students to have ever attained an overall U.S. No. 1 ranking!

Luke Triplett (grade 11) had a powerful performance as well. Luke is now the second-highest rated DA player ever. Luke had three consecutive rounds "paired up," (meaning he played people with higher national rankings), and in those three rounds lost zero. Luke scored a win and two draws during that run. It’s very hard to consistently score when faced with this level of competition, but Luke just kept doing it. Luke was a machine, and like teammate Christopher Chaves scored 100 percent paired down — this is very hard to do! Luke also scored a huge upset in his last game, defeating Jack Santer, one of Illinois’ top K-12 players.   Luke is the perfect example that sometimes the turtle wins the race. Persistence matters. He has been competing in chess tournaments since February of 2008. Luke played sparingly here and there but has always kept his foot in the game. He did not appear on a DA top 10 list (meaning the 10 highest-rated players in each grade) until the eighth grade. Since that time, Luke has gained 500 rating points in the last three years and four months with no end in sight for his development!

Christopher Chaves (grade 11) Christopher had the toughest road of the DA team, being paired up a brutal five times. He scored three upsets during this baptism by fire, including a last-round draw over higher-ranked Arjun Rai of Stuyvesant High School in New York City. Christopher tends to outplay his opponents in the opening, getting a sizable edge, but then struggles with the clock. In chess competitions, there is a certain amount of time allotted to play the game. Managing this time is a difficult skill. During Christopher's last-round game, he came close to winning but lost large portions of time trying to find the correct path. He grabbed the draw, which completed the "quadfecto" of all DA players, scoring upsets in the last round.