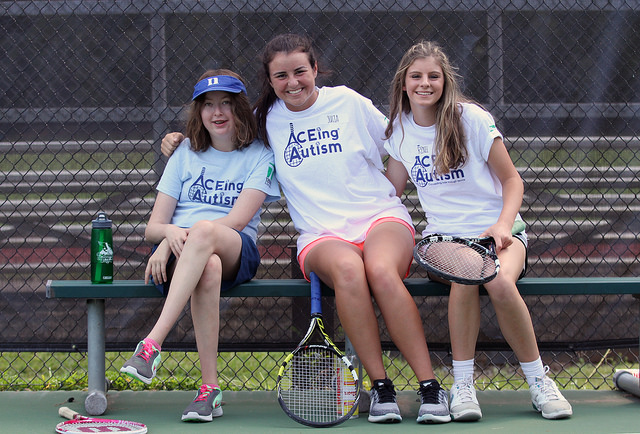 Lessons learned through athletics are immeasurable, from player-to-player cooperation to hand-eye coordination. But for children on the autism spectrum, opportunities to play sports can be limited.

It’s a reality familiar to Durham Academy senior Alexander Brandt — who loves playing tennis and, through family members, is familiar with challenges faced by children with developmental disabilities. So when he heard about ACEing Autism, a national nonprofit that aims to enhance the lives of children with autism through tennis, he leapt at the chance to establish a clinic here in Durham.

Three lessons into the first-ever ACEing Autism clinic on DA’s Upper School campus, ear-to-ear smiles — from children, their parents and the many volunteers working with the athletes — tell the story of a successful start to the program.

Lora Charles, mother of ACEing Autism participant Mateo, explained that her family has been on a quest to find appropriate after-school programs, from mainstream sports to YMCA programs, but they hadn’t had much success in finding a good fit for Mateo.

“He needs a bit more one-on-one help and attention, and waiting in line can be hard. So when Alexander put this email out, we thought, perfect, this is something we can try,” explained Charles, whose older son, Alex, is a DA classmate of Brandt’s. “There are a lot of people out on the court to help out. I wouldn’t say it’s Mateo’s favorite sport, but he’s loving it. He gets to be with high school kids and get some attention and exercise. And I’m hoping he’ll get to meet some other kids his age who live here in the area, maybe make some connections.”

Making connections is at the heart of the ACEing Autism program. Before Sunday’s lesson began, Mateo practiced hitting balls with DA senior Nicole Riepl while the two bonded over a shared affinity for Star Wars.

After all of the participants arrived, Brandt gathered the athletes and volunteers in a circle to explain the day’s agenda: a quick lap around the courts, stretches, groundstroke practice and hitting balls over the net. Such clarity — the itinerary is outlined with the aid of a schedule featuring photos — is intended to give participants a sense of structure and alleviate any anxiety about what is to come.

Flexibility is also key. If a participant prefers to skip the warmup and go straight to hitting balls, no problem. Others might not feel like playing tennis at all and prefer to engage in another form of play with the volunteers.

“It’s just getting out there and socializing with other kids and other people and doing something that makes them happy and makes them feel capable,” explained volunteer Ava Pacchiana, a DA senior.

Nine children are registered for the fall ACEing Autism clinic at DA, comprising six lessons in September and October, and Brandt hopes to hold another clinic at DA in spring 2017. ACEing Autism participants are typically asked to pay a small registration fee, but thanks to donations totaling nearly $3,000, both the fall and spring DA clinics are to be offered free of charge. Racquets and all other equipment are provided.

One or two volunteers are typically assigned to each athlete, and Brandt emphasizes that they don’t need tennis expertise to volunteer their time.

“I’ve had several volunteers this week and last week who don’t play tennis and it hasn’t been an issue at all,” he explained. “It might be as simple as putting a ball in a tee and telling the kid to hit it. It’s much more about the relationship than the tennis.” 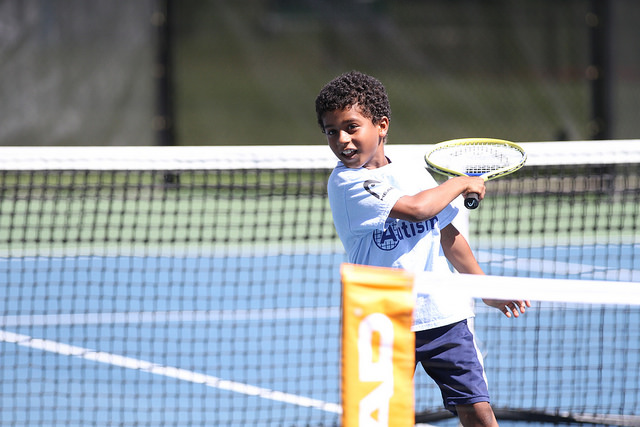 For Brandt, serving as an ACEing Autism program director is a marriage of two passions. A tennis player since the age of 5, Brandt is a standout on the Cavalier courts and competes in junior tournaments. He’s also driven to help people with autism and other developmental disabilities. Brandt has a cousin with autism, and his sister has some developmental issues that are similar to some of those exhibited by people on the autism spectrum. He previously taught tennis lessons to adults with special needs.

So when his aunt told him about ACEing Autism, he immediately applied to be a program director. The only other clinic sites in North Carolina were in Winston-Salem and Charlotte, and he knew that the program could do a lot of good in the Triangle area.

“Physical exercise is a stress reliever and serves lots of purposes other than just being physical exercise, and that’s something that a lot of people in the special needs community just don’t have access to,” Brandt said. “You can’t just join the rec basketball league. You need programs like this.”

After applying to establish a clinic back in January, he has been hard at work planning, fundraising and recruiting volunteers. About 20 people — mostly DA Upper Schoolers in addition to several parents and community members — have signed up to volunteer this fall, and Brandt welcomes additional volunteers for any of the remaining three dates. Email him at 18brandt@da.org for more information.

Pacchiana had some experience working with children with special needs through her volunteer work at the N.C. Therapeutic Riding Center, and jumped at the opportunity to help with ACEing Autism.

“It’s so inspiring — these kids who have such great obstacles, seeing them go out there and put so much effort and determination into an activity. It’s really helpful for them, to kind of remind them what they’re capable of. ... It’s a really positive experience for the kids and for the people working with them.”

ACEing Autism, which now comprises more than 50 clinic locations across the U.S., was founded in Boston in 2008 by Dr. Shafali Jeste, an autism researcher, and her husband, Richard Spurling. As Jeste explains in a column penned for autism news site Spectrum, tennis is an ideal physical outlet for children with autism in that it involves reciprocity: “A rally between opponents embodies a physical dialogue, with success often defined by players’ ability to read and predict the behavior of their opponent.”

Social interaction is a key part of ACEing Autism, with each lesson ending with a group cheer — “1, 2, 3, we love tennis!”

We love tennis, indeed! Awesome to see the game bringing people together here at DA via @ACEingAutism 🎾 pic.twitter.com/CIfmhJANw4

“I love doing it, and it’s the highlight of my week,” Brandt said. “I just enjoy seeing this group of kids — a population that otherwise might not have access to this activity — come out and have access to the sport that I love to play and have so much fun doing it. I’m glad that we’re able to help provide them with that opportunity, and I’m just really grateful that everything has worked out.” 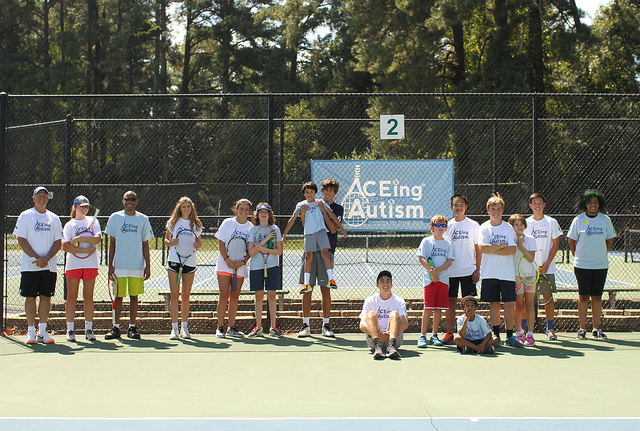