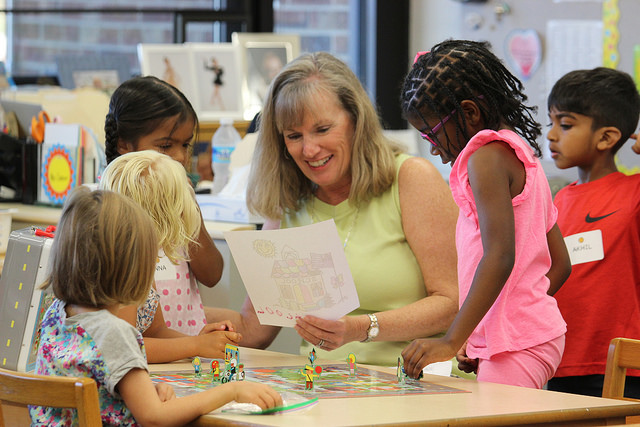 Durham Academy opened the 2016-2017 school year with its largest-ever student body: 1,203 students. While the school’s enrollment has risen incrementally for the past couple of decades, this year’s growth — up from 1,184 in 2015-2016 — is greater than in recent years, and that’s intentional.

As Director of Admissions Victoria Muradi explained in her Summer 2016 Durham Academy Magazine piece, interest in attending DA is at an all-time high, yet the number of current students choosing to leave DA is at an all-time low. The confluence of great interest (applications were up by 18 percent this year) and low attrition (4 percent) has led to difficult decisions in the Admissions Office.

“Each grade had long wait lists with qualified students we would otherwise love to have had at DA,” Muradi said. “It was gut-wrenching, but it reaffirmed the importance of the work the Optimal Size of School Task Force dedicated itself to last year. We needed to figure out how to balance preserving the core of the student experience — small class size, strong student-teacher relationships, high standards of excellence — while still honoring our commitments to keeping families intact, to our alumni, to recruiting the Triangle’s best and brightest, and to prioritizing diversity. ”

This year’s enrollment growth is the first step in an effort to strategically grow the school. DA’s 2015 Strategic Plan called for determining the optimal size of the school, and after a year of research and discussion, the Optimal School Size Task Force recommended and the Board of Trustees approved a slightly larger student body for 2016-2017. The school could grow to as large as 1,440 students by the year 2030, which will involve expanding and enhancing school facilities (read more on those plans in the Summer 2016 Durham Academy Magazine).

Much of this year’s enrollment growth is in the Upper School, where a low student-teacher ratio is maintained with the addition of new faculty positions and course sections.

Overall, 34 percent of applicants were admitted to DA for 2016-2017, but some grade levels had admission rates in the single digits. In all, 150 new students have joined the DA community.

This year’s enrollment is the most diverse in school history, with students of color representing 33 percent of the student body — up from 32 percent last year. “The percentage increase is on par with recent years, inching up about 1 to 2 percent per year,” Muradi said. “Diversity, in all forms, is something we continue to work on.”

DA’s student population is also geographically diverse, with many families driving in to school each day from zip codes far beyond the immediate area. Overall, DA’s student body draws 60 percent from Durham, 29 percent from Chapel Hill, 6 percent from Wake County and 5 percent from surrounding areas.