Sloan Nuernberger loved playing football and basketball with her two older brothers when she was growing up, but it wasn’t until she was the mother of three young boys that she discovered running.

“I started running after my third child was born. … You can imagine with three little kids, it's pretty chaotic. I viewed it as a way to be away from the children for a short period of time, to do something for myself while also burning calories and getting fit. My husband and I would kind of tag team — we’d both be gone for 30 minutes — and I would just run for 30 minutes.”

She ran for five or six years, increasing her endurance and her mileage, before signing up for any kind of race. She ran her first marathon in 2009 “totally on a whim” and finished in 3:59, a great time for a first marathon. The Durham Academy kindergarten teacher now has qualified for and run three consecutive Boston Marathons. She was among the 29,000 finishers at this year’s Boston Marathon, slogging 26.2 miles through heavy rains, 25- to 35-mile-per-hour wind gusts, a temperature of just 39 degrees and the race’s infamous Heartbreak Hill.

“It was by far the hardest race, but I think it is the one that I'm most proud, truly most proud, that I finished it, that I did it. I usually don't want to quit, even runs that are hard. I don't. If I tell myself I'm going to do a certain mileage, I don't stop unless something feels hurt. But this one I really wanted to quit, and I just didn't.”

Running teaches Nuernberger a lot about life. These are lessons she shares with her students — she taught DA second-graders last year before moving to kindergarten this year — and with her sons.

“It's hard sometimes. You don't want to do it sometimes, but there's so much joy in it. I tried to explain to the kindergartners what I'm doing. It's really hard for them to understand the concept of 26 miles — one mile is hard for them. For the second-graders, I felt like they kind of started to get it. I did Boston last year when I was [teaching] in second, and they started to ask really good questions about my training. I hope for my boys, our three kids, that they have learned you can find something you're passionate about. That is a great thing, to have this hobby that you're passionate about. They have seen me disappointed, they've seen me really happy, they've seen me just work really, really hard for something that I really wanted. I hope my students get it, but I really hope that my boys have learned from that.”

When she comes back from a race, Nuernberger’s students always ask, “Did you win?”

“And even my own boys, until they learned about running, I would do a race and come in and they would say, ‘Mom, did you win?’ I tell them I'm never going to win. Even if I entered a small 5K, I could possibly be the first masters maybe, but I'm never going to win a race. That's not what this is about. It's me wanting to be a little bit better than I was the day before.”

Nuernberger trains mostly by herself, and she’s never had a coach, but she loves to read about running. “I've read so many running books. I just love the sport and I love to tweak things in what I'm doing. I love that our bodies are capable of doing this. People say, how do you do it? I just work really hard at it. I wasn't a runner, and then I became a runner, and then I became a better runner because I just committed to it. It's something that brings me a lot of joy and it's a stress-reliever; it keeps me really healthy. I've seen the results of sticking with it. I'm very consistent. I rarely missed days. I don't really make excuses, I just do it. And I've seen results — to me that's just this amazing thing, that you can work harder at it and you can do that.”

She sees that with her students, too. “I love being a really, really small part of each child's journey in becoming who they are. A lot of people and lot of experiences play into shaping a child. I think it's just a real gift to be a small part of that. What I like best is the relationship that I form with the students, that's really important to me. Most of my time [teaching] was in first grade, so being a part of this language explosion where reading and writing start to all make sense to them is a really cool thing in first grade especially. You even see it here a little bit in kindergarten. I just loved when I taught first grade and all of those strategies that you've reinforced throughout the year all of a sudden make sense and they can start reading. To know that you've contributed in some way to that is just so rewarding.”

Nuernberger always knew she wanted to work with children. She graduated from UNC-Chapel Hill with a degree in elementary education and taught in Charlotte and Guilford County before moving to Durham.

“When we came to Durham, we had already had our oldest son, Silas, and then had two more boys, Jack and Bo. We had three very young children, very close in age,” Nuernberger said. Her oldest son was not quite 4 when her youngest was born. “It made sense for me to stay home, and I was lucky enough to be able to do that.”

She had been away from teaching for 13 years when she came to Durham Academy in 2016 as a second-grade teaching assistant. Almost immediately, she knew she was back where she belonged. “It was just this nice kind of realization that I stepped away from it and I came back to it, and it felt so comfortable and so right to be in the classroom.”

Nuernberger wasted no time returning to her Preschool classroom after this year’s Boston Marathon. She ran on April 16, flew home on April 17 and was back teaching on April 18. She sat on the floor with her students during morning circle time and passed her finisher’s medal around so each kindergartner could examine it and try it on. 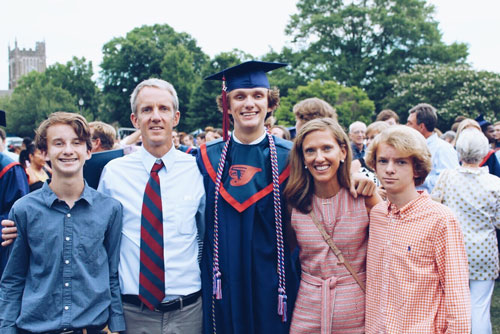 Nuernberger’s third Boston Marathon medal is a testament to her perseverance, not only for finishing this year’s grueling race but also for getting to her first Boston Marathon. She ran a 3:48 marathon in Richmond in 2012, a time that was just three minutes shy of qualifying for Boston. Then she ran Durham’s Tobacco Road Marathon with a time that qualified her to run the Boston Marathon with a minute to spare. But after terrorists’ bombs exploded at the 2013 Boston Marathon, there was such a surge of support and interest in running the race that qualifying times for the 2014 race were changed and Nuernberger now missed qualifying by 12 seconds. She kept at it and ran the Chicago Marathon in October 2014, finishing with a time that was seven minutes under Boston’s qualifying time. When registration opened in September 2015, Nuernberger signed up to run the 2016 Boston Marathon. She returned for the 2017 and 2018 races.

“It took me three races of qualifying to actually make it into the race itself. Since then, I've qualified in Boston except for this year. I missed it by one minute and I'm OK with that. I made this decision before I even knew the weather. I've been running marathons, one or two a year, since 2012. I had made this decision to my family and to myself that I was going to give it a break. I will do it again, but I'm going to give myself about a year to run short distance. I want to get faster at running short distance because if I get faster there that will translate to the marathon and my marathon will be faster. I'm going to spend a year or two running 5Ks, 10Ks and halfs, trying to get my time down in those races and then I'll go back to the marathon.”

Nuernberger finished at 3:56 this year. “My husband asked me before the race, he said tell me what you think, knowing the conditions, what you think you can do? I said I think I can come in under four, and I did. I didn't look at my watch the whole time, I just kind of ran by effort instead of focusing on my pace.”

She convinced herself to keep running by “doing this trick in my head where I say just get to the next mile. It was mile 14, I said just run to 15. At 15, just get 16. I just kind of break it up like that. It becomes such a mental game.”

The race got even more challenging when Nuernberger reached Heartbreak Hill, just over 20 miles into the race.

“I was running up Heartbreak Hill and I cut in front of this guy to get over to the side. I turned back to him and said I'm so sorry I just need to get over here and walk. And he said no, this is Heartbreak Hill, don't you let it break you, we're running up this hill. So I ran up with him to the finish. … I looked at him and said, thank you because I would have walked in. But he said no, don't let this break you, we're running, so I ran up to the top.”