Jazmin Garcia Smith was the first in her family to be born in the United States and the first to graduate from high school, and there was no doubt “college was something that was expected of me.” She went to the University of Notre Dame, a school that “was the absolute right fit for me socially and academically,” and since 2015 she has helped students navigate the college admissions process as Durham Academy’s co-director of college counseling. And partly because of the college counseling program, DA students experience something vastly different than what Garcia Smith went through in applying to college. 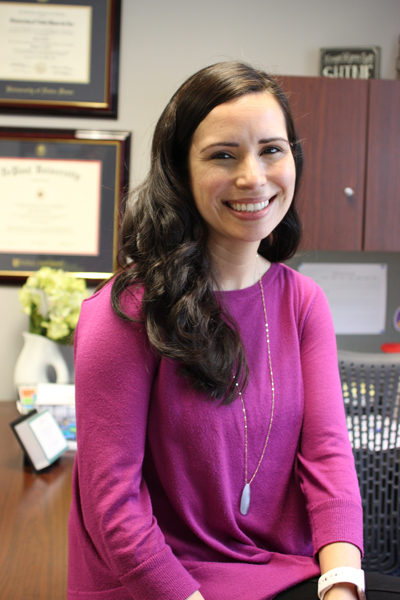 “I had to pretty much navigate a lot of that on my own because of the language barrier with my parents. I was usually the translator for them. I had to figure out how the process worked pretty much on my own because my parents had not been through it. Most of my surrounding community, where I spent most of my time, had not been through it either. I attended an all-girls Catholic high school where we had one college counselor for 800 girls.

“The process was different then. It wasn't nearly as complicated. I chose where was I was going to apply entirely on my own and really had planned on only applying to schools in California that were close by. My parents were pretty insistent that they wanted me to stay close to home.”

Garcia Smith’s parents had moved from Mexico to Los Angeles seeking better opportunities, and education was the cornerstone of opportunity. Garcia Smith’s mother, the eighth of 10 children and the youngest daughter, left school at fifth grade because her parents said it was time for her to learn a trade. Garcia Smith’s father, the youngest of 11 siblings, dropped out of high school, moved to the U.S. and worked rotating shifts alongside his brothers at a factory that made glass bottles. Her mother stayed home with Garcia Smith and her younger brother.

“They came over at a time when immigration was a much easier process, and they were able to become citizens just a few years later. It was challenging for them because my mom spoke very little English at the time and my dad spoke much more English. But it was still very culturally different. And thankfully, my dad's two brothers were living in Los Angeles so they were really our community.”

She grew up in an area of Los Angeles that was very diverse. It had a large percentage of Latino and Filipino families, and people from multicultural backgrounds. 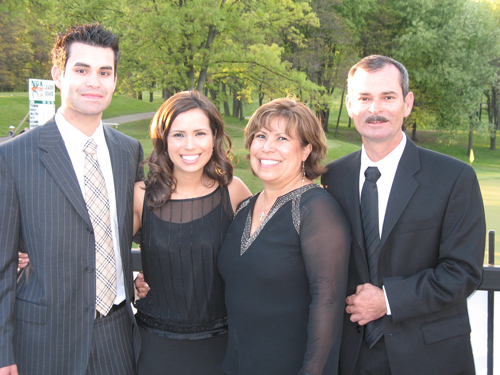 “Spanish was my first language. I didn't learn to speak English until I was in kindergarten, so I learned in school. It was terrifying. I still have memories of going to kindergarten and having teachers ask me questions, knowing what they were asking but not knowing how to respond to the English. And I think it's just stuck. For some reason, it gets in my head that I had those experiences. But it's fascinating how it all ends up working out in the end because now when I speak English most people don't necessarily assume that I speak Spanish, and when I'm in Mexico speaking Spanish they don't believe that I speak English.”

A high school friend who graduated before Garcia Smith came back after freshman year at Notre Dame and said she thought the school would be an amazing place for Garcia Smith.

“My mom and I went to an information session that one of the [Notre Dame] admissions counselors gave. For me, it was life-changing because I learned about this place that I just felt was the absolute right fit for me socially and academically. And from that point forward, I think I just felt like that was the place I wanted to be. I was lucky enough to get in. … Notre Dame also offered a wonderful financial aid package.”

Garcia Smith was able to fly out and visit the university through a special program that recruited multicultural students.

“I got a chance to see the school over a weekend with other admitted students. That experience further defined to me that it was the right place for me. I came home and somehow, I don't know how, convinced my parents that they should let me go off to college in the middle of nowhere in Indiana to a place that they had never seen. And that fall, my parents were able to fly out to Notre Dame and they dropped me off and I think they felt it, too. I think the minute they were there on the campus they thought this is really the right place for Jazmin.”

Garcia Smith was attracted by the Notre Dame’s focus on social justice and helping others. She was active in student government — serving as president of her senior class — and did an internship with an attorney. When she graduated she knew she wanted to do something to help people, and in her mind that meant law or education. 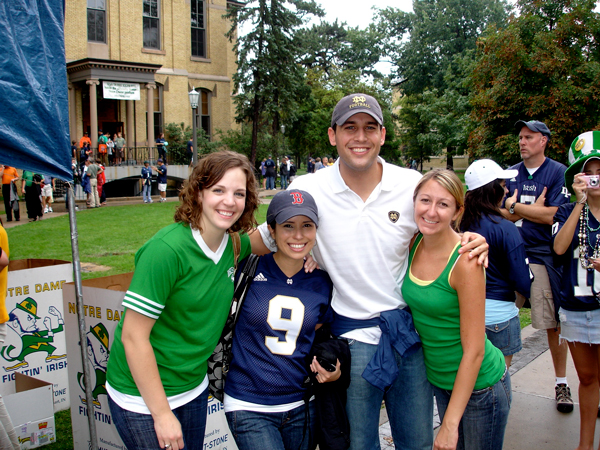 She spent two years as an admissions counselor at Notre Dame, recruiting students in Southern California, Hawaii, Alaska and Puerto Rico. “It felt to me like I was giving back because the admissions counselors who had come out to California to talk about Notre Dame had changed so much for me. I felt like I was I was able to do something similar for other students. The recruitment program that had given me the opportunity to see Notre Dame was now a program that I got to shape. I got to work and recruit students to Notre Dame. Those experiences for me were really rewarding, very rewarding. But in the back of my mind, I still thought I wanted to do something else.”

She was offered a scholarship to DePaul University College of Law in Chicago, and was in her first semester when her father became ill and was subsequently diagnosed with cancer.

“First year of law school is pretty tough. I think this made it even tougher, and it shifted all of my priorities. It had been really all about me and what I needed to do. I now was realizing that that was the last thing on my mind, that I wanted to be home with my family. I wanted to make them a priority. I flew home as much as I could during that time. But shortly after, about a month after I had finished my first year of law school, my dad passed away. And that experience just changed everything for me. I think it made me realize just how little of a priority law was, how much I appreciated the fact that I had been able to help people in admissions, how important family was to me. I was encouraged by some of my law school teachers to rethink — do you want to finish, do you want to stay? And I was pretty determined to stay. I wanted to stay, I wanted to graduate.”

Garcia Smith worked in DePaul’s law school admissions office her second and third year of law school “just to kind of keep my foot in the door.” She was offered a summer clerkship with a U.S. District Court judge in Charlotte. While the clerkship was “an amazing experience,” it also helped her realize she did not want to pursue law in the long term.

She married the summer after law school graduation, moved to North Carolina “kind of on a whim,” took the N.C. Bar Exam and began working with a Latino-focused law firm. Still feeling the pull of admissions work, Garcia Smith reached out to Steve Farmer, director of admissions at UNC-Chapel Hill. She joined the UNC admissions office in June 2010. “I spent five of the most amazing years there. … I was able to again feel like I was doing something that was giving back to people and helping people through what is often a very confusing and stressful process.” She also served as chair of UNC’s Latina/o Faculty and Staff Caucus.

Garcia Smith rose to the position of UNC’s senior assistant director of admissions. “The longer I was in admissions, the more I realized that the farther up you go, your role becomes far more administrative — and that means you have less interaction with students. I had been really lucky to come to Durham Academy several times while I was working at UNC to do presentations. And each time I was really intrigued by the community, I was really impressed. I thought everyone was so kind and thoughtful and had intelligent questions. I was always very impressed with the community.” 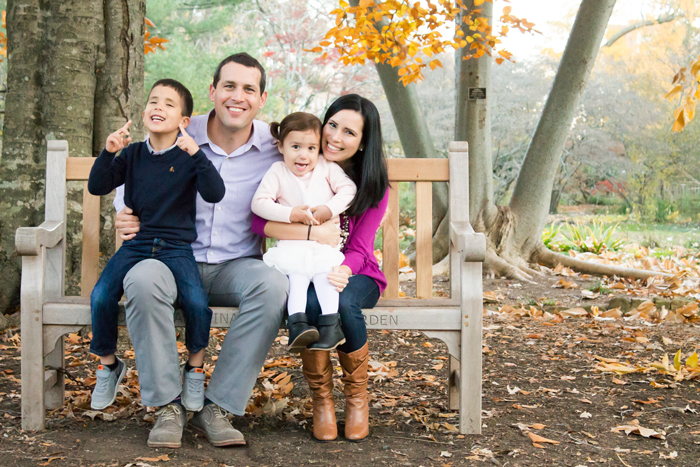 Realizing how much she missed working with students and families, Garcia Smith came to DA in 2015 as co-director of college counseling. Durham Academy has since become a family affair, with her son, Diego, a kindergartner this year, and her daughter, Mikaela, headed to pre-k in the fall.

“What I love most about my job, and it's maybe taken this long for me to realize what my calling in life is, but I'm working with students and parents and helping them through this process, navigating the complexity of college admissions. Finding a place that feels like the right fit and hopefully helping students find a place that they're as excited about as I was about Notre Dame when I finally found that right place.”

Garcia Smith recently helped lead a book club for DA parents that focused on the book Where You Go is Not Who You Will Be: An Antidote to the College Admissions Mania by Frank Bruni. Garcia Smith, Co-Director of College Counseling Kathy Cleaver and Upper School counselor Dr. Lindsey Copeland teamed up to address the stress and anxiety that often accompanies the college admissions process.

“The most selective schools are extremely unpredictable and obviously very difficult to get into oftentimes. But the message we want to get across is that you might find several colleges that really fit what you're looking for. And just because it's not the one the U.S. News and World Report rates the highest does not mean that you're not going to be somebody great, that you're not going to be able to achieve wonderful things and still be successful and happy.”

Garcia Smith is passionate about getting to know the students she works with and helping them get into colleges that are a good academic fit and social match.

“Every single student I work with is different and is looking for different things out of their college experience. I love brainstorming college list ideas and putting colleges on their radar that perhaps they had not thought of before. I love when students come into my office and show excitement about all of the possibilities before them. I am grateful to be able to be a part of this incredibly special time in their lives.”