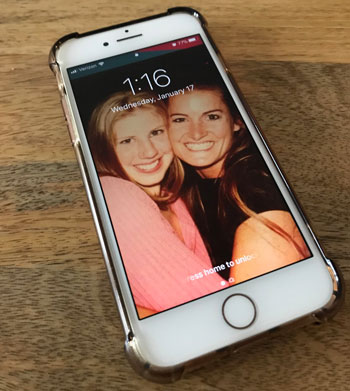 When Kristin Stroupe picks up her iPhone, two faces smile back at her: Stroupe’s own beaming face and the equally beaming face of her high school coach and mentor, Leigh Cooper Wallace. She helped change the course of Stroupe’s life and inspired her to impact the lives of others. At Durham Academy, Stroupe’s impact stretches from Preschool through Upper School. She teaches physical education classes to pre-kindergartners through fourth-graders, coaches cross-country and track, and volunteers with DA’s Ultimate Frisbee team.

Stroupe had never been involved with sports until her brother, a senior cross-country and track athlete at Boone’s Watauga High School, encouraged his sister, a shy ninth-grader, to join in, saying “I think you can be really good at this.”

That proved to be an understatement. Stroupe’s relay team won the state championship, and she was part of a cross-country team that took second place at the state meet. She went on to compete in cross-country and track at UNC-Chapel Hill, where she graduated with highest distinction in 2006.

And it was Leigh Cooper Wallace, her coach and mentor, who set the tone — and helped create the framework for Stroupe’s life. “I had an incredible high school coach who was an amazing mentor for me.”

Competing on those high school teams, “I just really learned what it was like to be a part of a community and to set huge goals. … It's just a culture that was really competitive but also a really incredible community and family. This was a turning point in my life in terms of what I decided to do in college and ultimately, now, what I'm doing as a career in terms of teaching and coaching.” 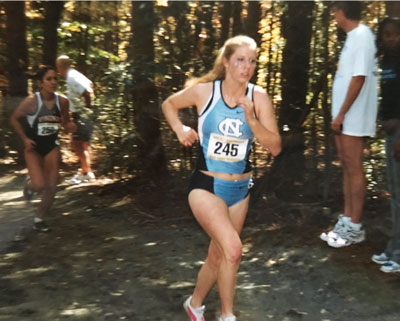 Stroupe was working on a double major in exercise and sport science and psychology at UNC. Her father, grandmother and great-grandmother were all teachers, and she was determined not to go that route. But by her junior year, Stroupe’s love for working with children won out. She changed her major to elementary education and interned at schools in Chapel Hill and Durham, leaving the cross-country team as a senior to devote more time to her teaching internship.

“It was an eye-opening experience. My kids didn't have PE very often. … That was the first time I hadn't been part of a team in some sense and have exercise be a part of my daily life. I felt the impact of how it made me feel. I thought how these little first-graders must be feeling and how does that impact their learning. And so my wheels got turning. I love working with kids but also this was a huge piece of me that I felt was missing. They didn't have the opportunity to move, and so I thought, maybe I'll explore physical education.”

Stroupe also thought it was time to live some place other than North Carolina.

“So I moved to New York with three suitcases.” She moved in with a family to take care of their 3-, 5- and 7-year-old sons in the afternoons and worked in a fitness facility at an investment bank in the mornings helping adults with their fitness goals.

“I learned there are so many adults, this is the first time ever being in a gym, and a lot of them didn't know how to take care of themselves. I was like, wow, I need to start early and hopefully instill a love of movement and physical activity and self-care and confidence and feeling comfortable walking into a gym and knowing how to take care of yourself. This has got to start earlier. So that also led me to decide to go back and explore PE.” 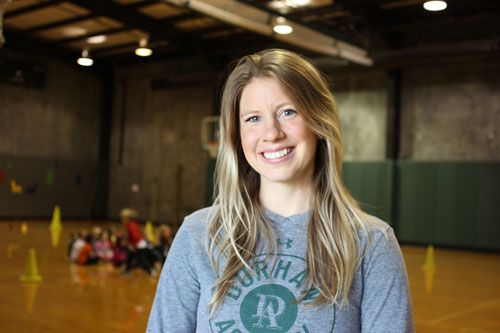 After graduating with a master’s degree in biobehavioral sciences from Teacher’s College, Columbia University, “I was thinking, who do I know that loves their job? So many people don't love what they do. And I thought back to one who loves her job and who had an impact on me, my high school coach Leigh Cooper Wallace. She loved what she did, and she was there during the really critical part of your life in high school where you're trying to find your way. And she believed in me and helped me reach all sorts of goals. When you're that age, it's really helpful to have a mentor.”

Stroupe decided she wanted to teach PE and coach, and took a job at The School at Columbia University, a K-8 school the university established for children of its employees and neighborhood families.

“They were really into innovation, and I learned a lot of really neat things about integrative teaching there. We were on teams where a PE teacher is planning with a science teacher who is planning with the Spanish teacher. It was a really valuable experience, and it got me into coaching.”

Two years later, Stroupe was offered a job with high schoolers, teaching PE and coaching track and cross-country at New York’s Trinity School. “I knew high school was where my life had been really impacted by a coach and I thought, gosh, this would be a way I would love to give back because I had such an incredible mentor. Could I learn and maybe try to be a mentor for someone else? My coach was actually one of the first people I called when I got offered the position. I said ‘I'm going to teach high school PE and health just like you. You had this huge impact on my life.’”

Stroupe went home to Boone over the summer and met with her coach before starting her new job. “She showed me around her classroom and just told me all the things that she had learned as a high school health and PE teacher at Watauga.”

The two were going to see each other again when Stroupe was home over winter break. She was looking forward to running with her coach, something they always did together when Stroupe was home for a visit. But it was not to be. Leigh Cooper Harris became ill and died unexpectedly of complications from pneumonia on Dec. 17.

“In a lot of ways, it inspired me to want to do this even more and figure out who I was as a coach and as a teacher. … That was a really pivotal moment in what I wanted to do. In a way, as I got into coaching and teaching, I felt more connected to her than ever, understanding what it was like to connect with students and to be a part of their dreams and goals and to share her legacy with other people. … I had an incredible role model. She was more than a coach. She was a mentor that believed in me and saw me for me and helped me bring out the best in me. We developed a really wonderful friendship, and I carry many of the lessons that she taught me.” 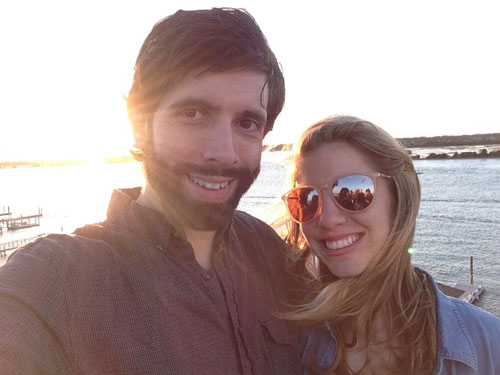 Stroupe was a top student from high school through grad school at Columbia, yet “so many of the greatest lessons I learned were outside of academics. I worked hard. I studied hard. But some of the most valuable lessons I learned about people and humanity and heartbreak and resiliency came from my experience through sport and team. That's where I learned a lot of life's hardest lessons in a safe but really authentic way.”

Those lessons were learned from Boone in western North Carolina to Prague in Eastern Europe, where Stroupe competed in the world championships for Ultimate in 2010. She began playing Ultimate her senior year at Carolina, and it was through mutual friends and Ultimate that she met her husband, Jeff Loperfido. They played together on an Ultimate team based in Philadelphia when he was in law school at Penn and she was living in New York.

Ultimate depends on players to self-referee, and that’s one of the things Stroupe values about the sport. “Nobody is checking behind you. You are making the calls and if you disagree, you discuss it and you come to a resolution. It teaches really interesting, really valuable sportsmanship skills.”

Stroupe joined the DA faculty in August 2017 after five years at New York’s Trinity School. It was hard to leave her Trinity students, but Stroupe said she’s excited to be teaching young children and coaching older students. “What’s so neat about working in a pre-K or K-to-12 school, is you can have the opportunity to teach in a lower school and still get to work with high schoolers. That's the neatest thing, getting to have those relationships over time.”

She wants her young PE students to “learn to love movement. I hope that they develop a confidence in themselves as people and movers. You hear so many times people have had a terrible experience in PE or think I'm not good at it or that it’s just not my thing. There really is something for everybody. It's figuring out what that is, but also believing in yourself, trying things that are challenging, learning new things, being open to trying new things. The really cool thing we have the opportunity to do in PE is that personal and social responsibility of working together to support each other in a really unique way through sporting activities.”

Stroupe enjoyed working with the DA cross-country team last fall, running with the team and training with them. “I loved that. I'm also really into yoga, and that's really important. At my previous school, they were looking to add more mindfulness and yoga to the curriculum, so I had the opportunity to do yoga training and to do some mindfulness training. I love running, and this is the piece that seems in some ways completely different from the competitiveness of competitive sports. It's really not. It's about finding a balance. I think it’s really important to have a balanced life, and I love that piece.”

A competitive runner through high school and college, she “loved competing for a team. To compete for myself, I don't quite have that interest.”

Stroupe ran the New York Marathon as a guide for an athlete with a visual impairment. “That was really rewarding. I don't have any desire to run a marathon for me, but to be able to help somebody else with their personal goal, that's more where my interests lie.”