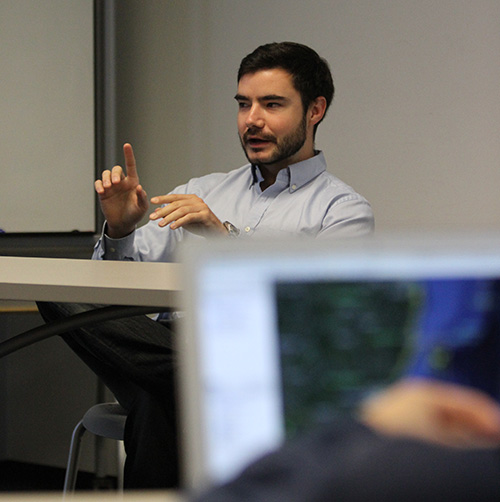 Marshall Friedman ’05 was “ready to do something completely different.” So after graduating from UNC-Chapel Hill with a major in business and minor in Chinese, the Durham Academy alumnus packed his bags and hopped a plane to Beijing.

Friedman’s story of jumping head-first into a culture so different from that he’d known the first two decades of his life kicked off “China: Land of Opportunity?” — the Upper School’s fall seminar that explored some of the opportunities and challenges of the $600 billion trade between the United States and China.

“The seminar program is always about what’s going on in the world, something interesting and current and important that isn’t in our regular curriculum,” explained program director Tina Bessias. “I try to make every seminar really different so that kids with different interests get an opportunity to explore them in this not-for-credit format that I call out-of-the-box learning.”

Each school year, students are offered two seminar opportunities, and they must apply to participate. For several years now, the spring seminar has been a two-day affair that immerses students in the Full Frame Documentary Film Festival. The focus of the fall seminar shifts each year, from Durham’s burgeoning food scene in 2014, to global humanitarianism in 2015, to this year’s one-day seminar on China — the content of which Bessias developed in collaboration with Upper School Chinese teacher Bonnie Wang and Middle School Chinese teacher Amanda Zhu.

Friedman, now back stateside as a Duke University M.B.A. candidate after having lived in cities all around China for five years, explained to the seven students participating in the fall seminar last week that while he’d taken three years of Chinese language classes at UNC, it was only when he moved to China and was immersed in the language that he got on the road to fluency.

“It is hard,” he said after offering advice on writing characters to the participants who are now learning Chinese at DA. “But the thing is that if you put the time and effort into it, it’s a very unique skill that people think is very valuable here in the U.S., too.”

Friedman detailed some of the curiosities that he experienced while working in business development and marketing for Chinese e-commerce company Alibaba and its subsidiary Tmall.

“Nobody knows what is going to sell big or blow up in China. But Craisins and mixed nuts — they’re just huge, and no one knows why,” he said, gesturing toward a screen displaying dried cranberries on the Tmall website. “They’re just extremely popular.”

After hearing Friedman’s perspective on Chinese business, seminar participants took a bus to The Frontier, a space for startups and other small businesses in Research Triangle Park. There, students heard from several other individuals whose work is tied to China’s economy: Paul Taylor, commercial officer with the U.S. Department of Commerce; Michelle Wang, international marketing specialist with the N.C. Department of Agriculture and Consumer Services; DA alumnus Adam Lang ’98, who manages sign manufacturer Colite’s work in China; DA parent David Chen, chairman and CEO of medical device manufacturer Scion Medical Technologies; and DA parents Zoe Jewell and Sky Abilihai, whose nonprofit, WildTrack, has helped with non-invasive monitoring of the giant panda and Amur tiger in China. 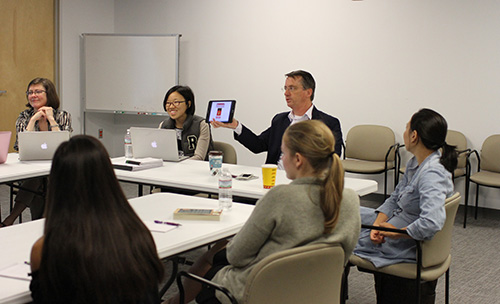 Ninth-grader Carlton zum Brunnen found Taylor, of the Department of Commerce, particularly interesting because of his insights on the aviation and automobile industries, which are of particular interest to zum Brunnen.

Taylor talked about the changes he’s witnessed in China from the time that he lived there as a 20-something in the early 1990s. China’s strategic economic focus changes over the years, he explained, noting that up until the late 1990s, the nation’s vehicles were produced by state-owned manufacturers and weren’t known for being high quality — but then the Chinese government decided to place more emphasis on the automobile sector.

“You saw automobiles go from nothing in China to being everywhere,” he recalled. “When I moved to China in 1993, almost everybody rode their bicycle in Shanghai. I rode my bike all over that city. On most of the streets, there would be three lanes for bikes, and one lane for cars. Now, there are four lanes for cars and no lanes for bicycles.”

Michelle Wang explained that China’s growing population coupled with a lack of arable land means that the nation cannot feed itself and must import products like peanuts, soybeans, sorghum (for wine) and wild ginseng from North Carolina.

“The Chinese have a unique diet — they eat some things that we don’t eat in the United States, like chicken feet,” she said. “In the U.S., we would throw chicken feet away or render them, but now, we’re starting to export them. Right now, chicken feet are gold for chicken manufacturers — they bring in more money than anything else because of trade with China.”

The inclusion of so many speakers here in the Triangle area — many of them part of the DA community — with such a wide range of professional experiences in China underscores the importance of the U.S.-China trade in today’s global economy, Bonnie Wang said.

“This is a part of our life. So much of what is around us is a part of globalization. … There are a lot of things going on with culture, languages, trading policies,” she explained. “We want students to see these issues as global citizens — to open their minds, open their eyes a bit wider to be ready for what’s going to happen in the future.”