All seven of Durham Academy’s fall athletics teams have had a phenomenal season, which wrapped up this week with DA state championships in girls tennis and girls cross-country, and an oh-so-close runner-up finish by the boys cross-country team. 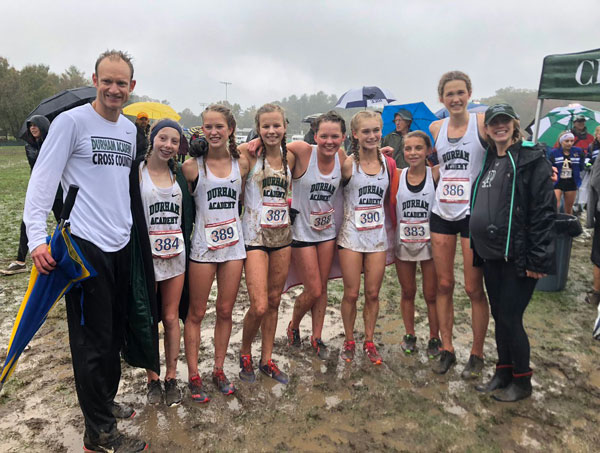 At the N.C. Independent Schools Athletic Association cross-country meet in Hendersonville on Friday, the DA girls earned the 4A state championship, with seventh-grader Allison Hall crossing the finish line first to claim the individual title. Ninth-grader Stella Stringer and sophomore Anna Catherine Wilson were right behind Hall, speeding through rain and mud for a 1–2–3 DA sweep. Junior Claire Middleton joined Hall, Stringer and Wilson on the All-State team by finishing eighth. The Cavs finished with 36 points to hold off second-place Cary Academy by 25.

The DA boys came oh-so-close to a Cavalier cross-country sweep but had to settle for the state runner-up trophy after a gutsy performance in the mud at Jackson Park. The Cavs lost to heavily favored Providence Day School by just one point. Four DA boys made the All-State squad; senior Neil Mosca (fourth), sophomore Jay Shanahan (fifth), and juniors Mac Hays (10th) and Mark Alkins (11th) paced the Cavs. 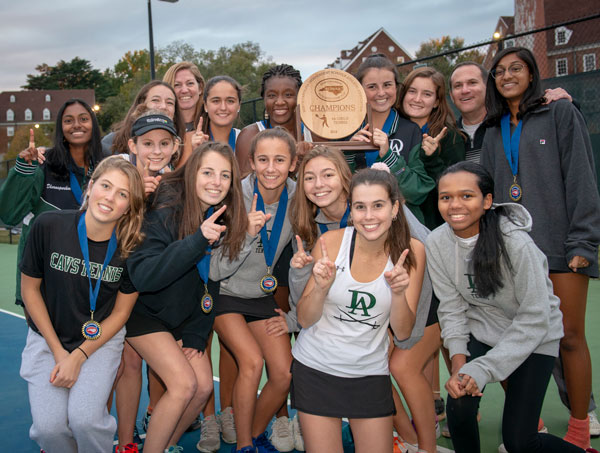 On Saturday, the girls tennis team captured the program’s second consecutive state championship with a 5–2 win over Charlotte Latin School. The DA girls ended the season on a 19-match win streak. Juniors Madeline Towning and Alexis Galloway started things off with an 8–1 win at first doubles. The duo is now 31–4 together as a doubles team. Senior Julia King finished her DA career with a win as she teamed with junior Sarah Clark for an 8–3 win at third doubles. King leaves DA with a final individual record of 52–3. In singles play, Galloway was first off with a 6–0, 6–0 win on court three. She ended the year 34–1 to set the school record for most wins in a season. Clark rallied from a tough first set to defeat her opponent 1–6, 6–1, 10–2 to put the Cavs one win away. Junior Renee George clinched the championship, taking a 6–1, 6–1 win on court four, setting off the celebration. Senior Joy Callwood and Towning were named to the All-State team.

All seven of our varsity teams have much to celebrate from the fall season.

The volleyball (14–9) and field hockey (8–6–1) squads came inches away from a state finals appearance, and the girls golf team had a solid year with a young team, highlighted by a win over 15 other schools in the North State Girls High School Challenge. The boys soccer team finished the season with a record of 10–4 and second place in the Triangle Independent Schools Athletic Conference — and scored a memorable upset win over Ravenscroft on homecoming.