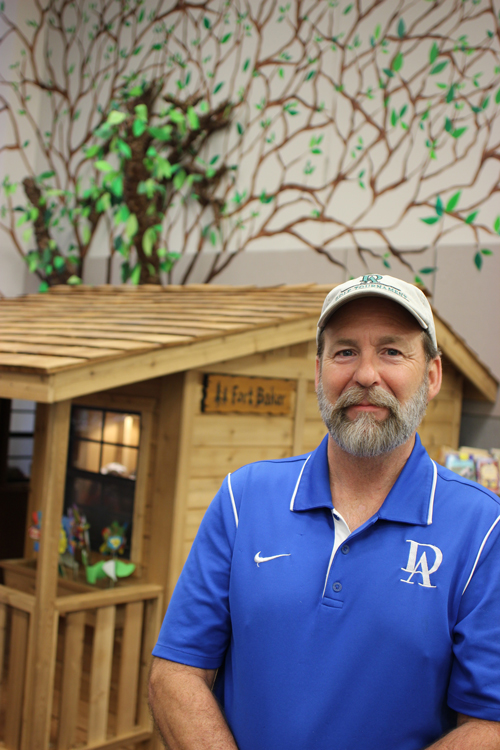 Maintenance foreman Randy Baker has been working at Durham Academy for 37 years and is the father of a DA graduate, but were it not for a head poking around the corner of the business office, Baker wouldn’t be here at all.

Baker worked as an auto mechanic after graduating from Jordan High School. He spent a short time making surgical instruments, and was looking for an opportunity after being laid off from Liggett and Myers Tobacco Company, and reaching the end of a six-month assignment with IBM. Baker was drawing unemployment when he heard Durham Academy was looking for someone to do general maintenance.

He came to DA’s Academy Road campus inquiring about the job and was asked to come back the next day because the business manager, Jim Horner, was too busy to talk with him. Baker agreed but knew it was unlikely he would return.

“I was fixing to leave when Mr. Horner stuck his head around the corner and said come in for just a few minutes. He probably spent 45 minutes to an hour talking to me. For somebody who didn’t have time, he took a long time! He asked when I could start work. I said tomorrow because I needed a job. He said how about Monday — this was Wednesday — so Monday morning I came to work on the 23rd of February 1981.”

Baker spent his first 27 years working on the Academy Road campus, then moved to the Ridge Road campus as maintenance foreman when a co-worker retired. He has set up thousands of tables and chairs, mowed miles of grass, changed hundreds of light bulbs, installed dozens of toilet valves, repaired all kinds of equipment and removed the occasional black snake from campus — but what keeps him here is the people.

“I love the people I work with, the teachers, the kids, the parents are good to us. The kids are what it’s about.”

There’s at least one student who would not have come to Durham Academy if it hadn’t been for Baker.

“One day I was driving the Gator at the Lower School. I looked across the parking lot where the PAB [Brumley Performing Arts Building] is and there was a little boy pulling away from his mama. She was trying to get him to come in, so I pulled over there with the Gator and spoke to them. I asked the little boy if he wanted to get on the Gator. He got on the Gator and turned the steering wheel, then he got off and went inside with his mother. It was probably two years later the mother came up to me and told me that was one of the reasons they came to school here. He didn’t want to go in [for testing]. Something about being on that Gator, he must have gotten relaxed or felt at ease or something and she told me that was one of the reasons they came here. It makes you feel good because it’s not often that happens to you, not just to a maintenance guy but to a teacher or whatever. It made me feel good that she came back and told me that. I was glad to know that I had helped.” 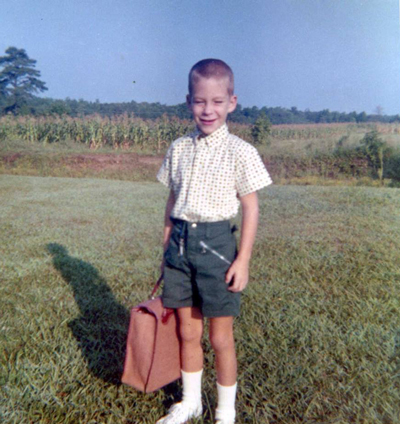 Baker grew up in south Durham when it was farmland with hogs and cows, not the commercial development that has since sprouted there. He lived across the pasture from his grandmother’s farm and was surrounded by aunts and uncles who lived nearby. “I have a couple of acres there now. I’m the only one, everyone else is gone. I’m the last dinosaur left.” Baker and his wife, Becky, live in the same house his family moved to when he was just a year old. And that’s where they raised their daughter, Katie, a DA “lifer” who graduated in 2012.

“I’ve been there my whole life in the same place, same area, Lowe’s Grove. I grew up poor. My father died when I was 6, so my mother raised my sister and me. It was pretty tough back in the 60s. … My daddy was a carpenter, he built wooden caskets. He did some fantastic work. I wish I could do what he did. I’m fair at carpentry, but he was an expert at it.”

Lower School teachers would argue that Baker is more than fair at carpentry. He’s taken on many projects there, including building a large treehouse in the Lower School library.

“When [librarian] Michelle Rosen came up to me and said, I want to run something across you — that’s scary words from her because I know, uh oh, what’s up.” She told Baker she wanted him to build a treehouse in the library, showed him several kits and ordered the one they liked best. 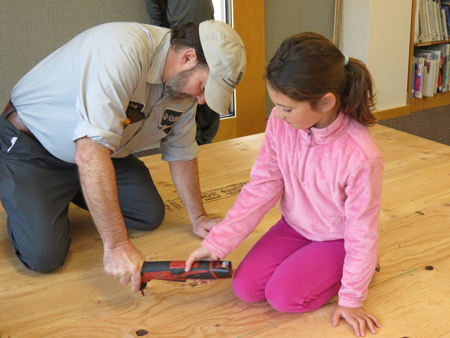 “I got to thinking it sure would be nice for every kid to put one screw or one nail in it, so they would feel like they were part of it instead of me just building it. I scheduled it class by class so every kid in the Lower School put a nail or screw in it. It took a lot of patience. I could have finished in a week or two and it took a month, but it was well worth it to have the kids be a part of it. Preschool kids even made the flowers that went into the flower boxes, that was their part.”

The Lower School named the treehouse Fort Baker for the man who built it. “It was a treat for them to do that and it was an honor. They had a little assembly and it was sweet. I loved it.”

If Baker’s carpentry skills come from his father, his devotion to gardening comes from his mother. “My mother worked as a receptionist at a dentist’s office then went to be a teller at Central Carolina Bank and Trust for 20 to 30 years. She’d also mow the grass at the bank to get extra money. She raised a garden, she loved flowers and I think that’s where I get my love for flowers. I love to see them bloom. I love to garden.”

He also keeps chickens, and the single thing he enjoys most at Durham Academy is providing eggs that hatch in the Preschool science room each spring. It’s something he’s been doing for more than 30 years. 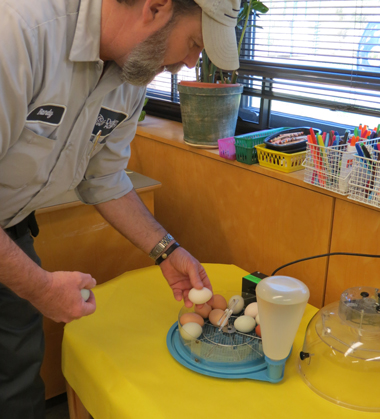 “I have three different coops to make sure I’ve got fertile eggs [for the Preschool]. I’ve got three coops in case one rooster is not doing his job. I separate them so the roosters don’t fight, and I let a coop out every day when I get home. If you don’t put them in the coop you won’t have them, because a hawk, coyote, fox or something will get them. I’ve had that happen. The Preschool used to order eggs and sometimes they wouldn’t hatch. The week I’m collecting them, I go home mid-morning and collect some, try to get some from each coop. We’ve had good results the last five to 10 years. I help get the incubator set up and adjusted so it’s the right temperature. It takes 21 days from when you put the eggs in there. We have to plan because you don’t want them to hatch on a Saturday or Sunday. You want them to hatch when the kids are there and can watch. I love to watch their expressions. I love it, too. I’m a kid, too.”

There’s another way that Baker is still a kid: He loves taking things apart to see how they work.

“When I was a kid, I would tear things apart. I never seemed to get them back together, but I saw how things worked and that has helped me in maintenance. I feel like if man built it, man can take it apart. That’s not always the case, but if you’re not scared to try to fix something, maybe you can. I fix some things, some things I don’t, but I’ve always taken things apart. I want to see how things work. Sometimes I take things apart and still don’t see how they work.” 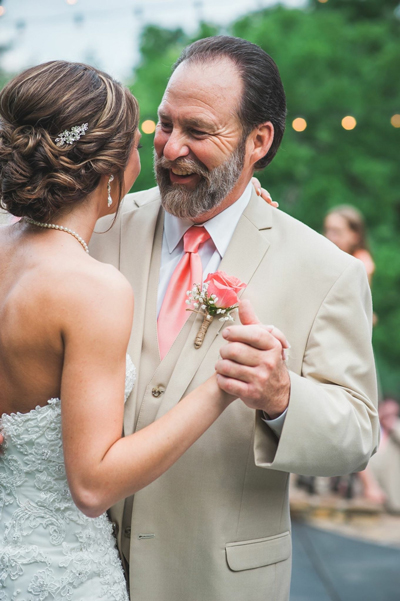 He is amazed at the workmanship he sees in farm equipment and household items “people made in olden days, from apple peelers to egg beaters.” A longtime collector of antiques, Baker has more than 100 pieces of cast iron cookware made by Griswold Manufacturing, a company that was in business from 1865 until 1957.

“I used to go to a lot of antique shows. For 15 years, I’ve gone to the flea market at the State Fairgrounds. That’s my entertainment, to get away and walk through and look, see if I find anything, but just to get away, that’s my peace time. I get up at 6, get there at 7 or a little before, and I’m back home by 9:30 or 10. I have to go through DTs, withdrawals when State Fair is there [and not the flea market]. I always look forward to November when the flea market comes back.”

Baker doesn’t particularly like to travel, but about 20 years ago he drove to Maine to visit Mr. Horner, the long-retired DA business manager who had hired him, and of course he checked out flea markets along the way.

Most of his driving is to the mountains of southwest Virginia, where he owns a cabin and 14 acres of land.

“I go up there and plant trees and flowers and bush hog and work. I planted a lot of red maples and Japanese maples trying to give it some color because it was all open. I like to see things grow. I take a picture now and in another in 10 years, I can say this is what it used to look like. I could stand being there nine months a year — it’s the most beautiful place — but January, February can be tough; so can December and March.”

Baker has seen a number of folks retire over his 37 years at Durham Academy, and it’s been his job to put a plaque with years of service on the chair that is given to a retiring teacher or staff member.

He’s 60 now and is beginning to think about his own retirement. He knows how he wants to wrap up his long career at Durham Academy.

“When I retire I want to put my own plaque on a chair. That will be the last one I do.”