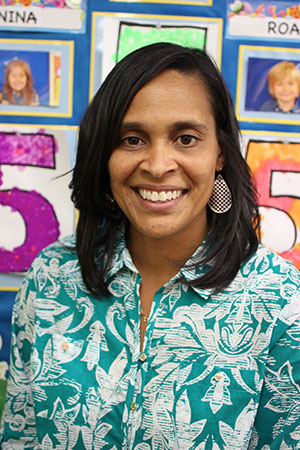 Nikki Graves didn’t know quite how to take it when her fourth-grade teacher said she had a very commanding presence. “But I figured out pretty fast that meant somewhere down the line I was supposed to be in a leadership role.”

And lead, she has. Graves began playing basketball when she was 6, and at age 8 she scored 56 points in a 58-53 victory. After the game she was asked about the lopsided scoring, and remembers saying “I passed the ball to my teammates, but they kept passing it back to me.”

That take-charge, pint-size player from a tiny town in eastern North Carolina grew up to be an award-winning college basketball player. She had a brief pro basketball career in Germany; spent 10 years running an after-school program for inner-city girls at the Boys and Girls Club in Raleigh; and since 2010, she’s been a pre-kindergarten teacher and basketball coach at Durham Academy.

“I’m very much a coach in the classroom. I’m very direct. I like to tell you what to do, but it’s the manner in which I teach you how to do it. I’m not bossy. I’m just direct and straight to the point, and that’s also how I teach basketball.”

Teaching 4-year-olds and coaching JV girls basketball — a team that can range from eighth- to 11th-graders — is something Graves takes in stride.

“Believe it or not, it’s not that much of a difference because with both of them you have a lot of explaining. They’re not very experienced with basketball or with cutting, so it’s a lot of explaining, a lot of being silly with them. In pre-k, I sing a lot and, in practice I act silly a lot, and I think that transcends very well. The girls actually respond to me being silly and not being a yeller. The same thing with my 4-year-olds: When it’s time to pack up [at the end of the day], they know ‘lunch box-backpack-green folders.’ ” Graves sings those words, her pre-k students sing along and it helps them remember what they need to take home. When it’s time to use scissors, Graves will hear them quietly singing “Cut on the line, cut on the line and you’ll do just fine.” 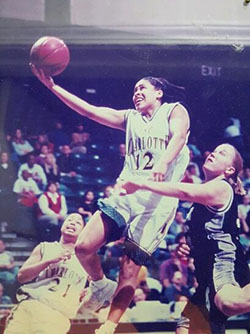 Graves grew up in Nashville, North Carolina, and attended elementary school in nearby Red Oak, where her mother taught first grade for more than 20 years. “Red Oak Elementary was a great school, a hands-on school, and I can still name every one of my teachers, so I know they had an impact on me.”

Graves ran cross country and played volleyball, basketball and softball in high school. When it came time to make a decision about playing in college, it was between softball and basketball “and basketball was my first love.”

Graves was a N.C. State fan and was offered a basketball scholarship by legendary N.C. State coach Kay Yow. She turned Yow down to play for Ed Baldwin, who had recruited her when he was an assistant coach at N.C. State but had moved on the head coaching job at UNC-Charlotte. She scored 1,183 points during her 1996-1999 career at UNC-Charlotte and remains in the school’s top 10 in three-point shooting, free-throw shooting and assists. She won the Golden Nugget Award for the player who demonstrates the most dedication and determination. 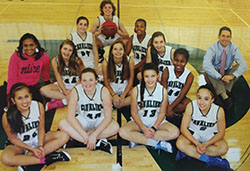 “I had try-outs for the WNBA, but the year I came out of school they had a lock-out so they didn’t sign any new players.” She played basketball for six months in Germany after graduation, but she rarely plays now. “A couple of years ago I was playing in an all-men’s league. I was the only female out there — I was playing with my husband — and I ruptured the tendon in my thumb. I haven’t played since then, but I still love it.”

Rural Nashville and Red Oak are very different communities than Durham, but Graves and her husband, Michael, were looking for a school like Red Oak Elementary for their son, Nikolas, a school where he would remember that each teacher has impacted his life.

They came to Durham Academy for a tour and “it just felt like home. It was so welcoming, open and diverse, with kids from all different cultures. That’s what we were looking for — to expose Nikolas to things we couldn’t normally get at other schools that were in our district. It was just a warm, welcoming environment that drew us here.”

Nikolas came to DA for pre-k in 2008, two years later Graves joined the Preschool faculty, and daughter McKenzie began pre-k in 2011. Graves is in her sixth year teaching and coaching at DA, Nikolas is in sixth grade, and McKenzie is in third grade. 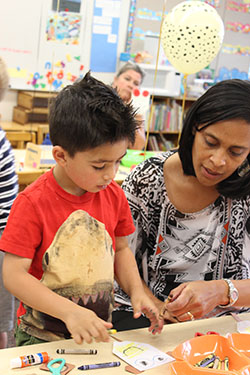 She says was a little timid when she began working at DA, but she soon realized that the teachers were very supportive. “If I had questions or didn’t know the answer to something, I could just pop in and ask them questions.”

Graves likes how she can build relationships “not only with my students but with their parents. I like forming relationships with my colleagues here at school, but they are not just my colleagues, I consider them my friends outside of Durham Academy. … We are all different and unique people who work here, and I think it’s important that we all get to use our own teaching styles. No one is putting us in a box and saying we have to do it this type of way.”

She loves coaching every bit as much as she loves teaching, and her basketball teams have been tremendously successful. She coached the eighth-grade girls team her first year at DA, and the team went undefeated. This is her fifth year coaching JV girls, and the first three of those years the team won the conference championship.

She’s a competitive person. “I have always been one to use the word ‘can’t’ as a motivator to show you that I can.”

Graves loves to garden, but coaching occupies a big part of her life outside of Durham Academy. Graves coaches Nikolas’s AAU basketball team, has coached McKenzie’s soccer team for four years, and coaches three girls basketball teams for Oak Grove Athletic Association, where she also serves on the association’s board.