When Lower School Director Carolyn Ronco asked third-grade teacher Jeff Burch if he would help represent the Lower School in the lip sync battle at Friday’s All-School Pep Rally, his answer was only if he could be in charge. And was Burch ever in charge! 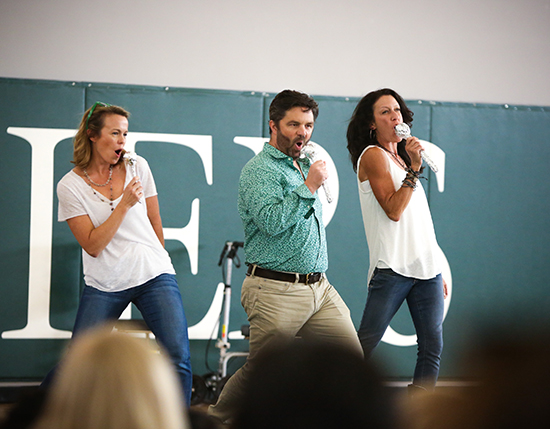 Burch was front and center when the feel-good song of the summer, Justin Timberlake’s Can’t Stop the Feeling, fired up faculty and students alike in Kirby Gym. Clutching a “microphone” molded from aluminum foil, Burch wowed the crowd as he took center stage and serenaded students from one side of the gym to the other. As Burch channeled the Prince of Pop, Lower School teachers served as backup dancers and a colorful flag corps, performing a routine he had choreographed for them.  (See video below.)

Performing, creating and coaching is second nature for Burch. Durham Academy knows Burch as an outstanding third-grade teacher — he was chosen “Best Teacher” in Durham Magazine’s 2012 Best of Durham issue — but he was performing and choreographing long before he stood in front of a classroom.

Cheerleading squads, dance teams, marching bands and flag corps — Burch has worked with those and more. As an undergraduate at Indiana University, he was the flag instructor for the Marching Hundred, which has been recognized as one of the country’s most outstanding college marching bands.

Burch aspires to coach teachers. He is working on a Master of Education degree in literacy at UNC because he knows he’ll need an advanced degree for that work. “In my graduate classes I find myself teaching other people all the time. It’s been throughout my life. I was leader of the youth group at church. I choreographed musicals and taught show choirs when I was in Indianapolis.” 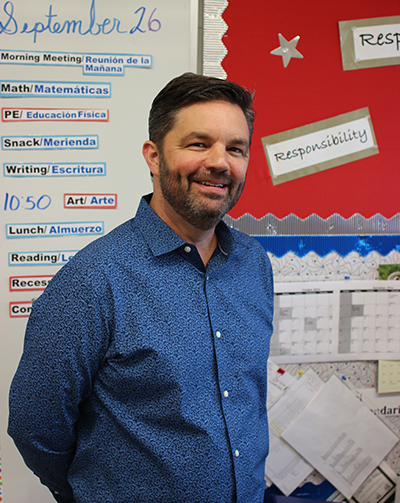 Burch grew up in farming country in southern Indiana with what he describes as “an almost idyllic childhood. We could do whatever we wanted, there were no boundaries — swimming in cow ponds, jumping out of the barn, hiking in creeks, literally what people dream of. There was very much freedom. The part that was hard was I was a different kid. Third grade was this magical moment for me. I had a dear friend, her name was Anita, she was kind of a little tomboy and I was this kid who was just odd and different. I remember even in first grade, kids calling me names and being not so nice to me. In third grade, the two of us created this magical friendship that really sustained me.”

Burch also had a close bond with his cousin, Kim, and they often spent weekends together even though she lived two hours away. “I was really interested in gymnastics. It was 1972 — the Olympics, Olga Korbut and all that stuff had happened. My cousin and I spent a lot of time doing round-offs and cartwheels and handsprings and flips, but that didn’t go over well in this rural part of the country. I went to a high school where kids drove tractors to school sometimes.”

Burch didn’t let that stop him. He tried out for the cheerleading squad as a sixth-grader and became the first male cheerleader at his junior high school. He broke gender barriers again as a sophomore when he tried out for color guard in the school band. “I was the first boy to do it, and I did well because my cousin had taught me. … I did that, and it was amazing. People saw me, I was very talented, I was very good at it.”

Burch remembers going to a marching band contest with his cousin when they were in junior high. They were watching Kim’s older brother march in the high school band. 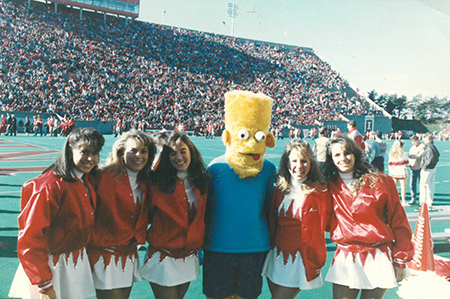 “My life changed forever on that day. I remember it so vividly because it was stormy and windy and it was beautiful and I was just mesmerized by these people out there marching around. Their high school was in Bloomington, Indiana. Kids doing non-traditional stuff was okay because it was in a big university town. There were boys in their color guard, the rifles and the flags, and I said, oh my God, that’s what I want to do.”

Burch developed a reputation as a leader and innovator. He started teaching other schools’ color guards when he was a high school senior. What began as volunteer work eventually grew to a gig that earned him $100 an hour.

“Doing that work, working with high school kids, making things, doing that creative work, figuring out how to get groups of people to do things together was really important foundational work for my teaching. When I got to Indiana [University] and learned about task analysis, learned to look at a kid’s work and figure out what they were doing wrong, it made complete sense to me. When she tosses the flag, why does her flag go that direction when everybody else’s goes up? I started watching and paying attention and I figured out how to break it down. Breaking things down bit-by-bit — it’s the same thing as when you’re teaching reading. You have to break it down.”

Burch hadn’t always wanted to be a teacher. He grew up in a religious family — they attended a historic church that predated Indiana’s statehood — and he had wanted to be a minister. As he got older he was interested in being a therapist, a dancer or a fashion designer. But his mother thought he should be a teacher.

Neither of Burch’s parents had attended college, but they encouraged him to go. He started at a small junior college but quit and came home for a while “because I didn’t know what I was doing. … My parents are hard-working, amazing people. They said you’re not just sitting around.” His father helped him get a job driving a delivery truck from 4:30 to 10:30 a.m., and his mother, who was a teaching assistant, suggested he volunteer in a classroom with blind students.

“I volunteered the entire semester and I really liked it. It was confirming what my mother had said.” He also approached the high school band director about working with the color guard. “I started with four flag kids and grew the program to 16 flag kids.”

When Burch was ready to return to college, he was accepted at Indiana University and got a job as flag instructor for the marching band. “I had 24 kids the first year. The last two years I did it, it was me and 36 coeds. It was my program, and I was an undergraduate. … Boy, I learned a lot. The band had 300 people. I went to the band directors and said you don’t give us [the flag corps] enough respect. They changed, they moved us to the front, they gave us a feature. 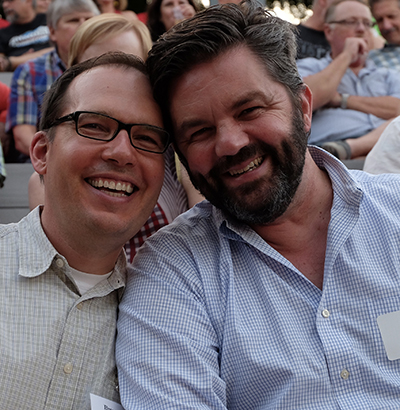 “My entire life, I’ve had this advocacy role of speaking up. I’ve never been afraid to speak my mind, and that’s been both positive and negative because sometimes people don’t want you to speak your mind. If there’s an elephant in the room, I’m always the one to say, look at that elephant!”

Burch came out as gay in 1985 and within a year, some of his best friends were diagnosed with HIV. His best friend from college died of AIDS in 1992. At that time, Burch was living in Indianapolis, where Ryan White, a hemophiliac who contracted AIDS from a blood transfusion, was not allowed to attend public school. “That’s when I started my teaching career. … There was all of that stuff.”

Being gay is just one part of Burch’s life, but it’s a part he’s open about at a school that prioritizes inclusion. “If a child asks me [if I’m gay], I am absolutely comfortable saying yes and I have a partner named Brent. We live together and we have a dog. That’s all they need to know. … But it’s also important that if parents want to say that to their kids as a way to teach their children about the world, I want them to know it’s OK to say, ‘Well Mr. Burch is gay. There are all kinds of people in the world.’ ”

Burch graduated from Indiana in December 1991 and moved to Indianapolis. He interviewed for a fourth-grade job at an inner-city school and asked when the job would start. “They said tomorrow because somebody had quit the day before. I found out later they had run out three teachers. One teacher had left screaming, saying ‘you are terrible kids.’ I stayed, I was there everyday with them to the end of the year.”

He taught four years in Indianapolis public schools, including two years at a fine arts school. “I was able to tap back into my color guard stuff and my music experience. … We had a folk dance festival in Indianapolis. I volunteered and taught kids dance lessons. It was a big, huge production at the convention center with 1,000 kids doing folk dances.” He also helped secure a $25,000 grant to support fine arts in the schools, giving students experience with dance, theater, opera and music. 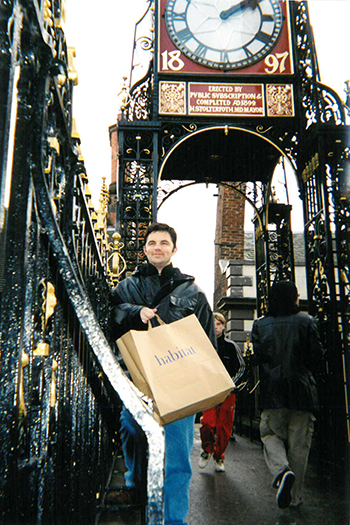 Burch was feeling burned out when he heard about an opening for a third-grade teacher at The Orchard School, a progressive school that counts Kurt Vonnegut among its alumni. Burch landed the job and “that changed everything. They said it takes three years to grow an Orchard teacher. It was all about watching kids, helping them grow, learning about who they are, not just telling them to sit down and be quiet. It was really working as a community and developing their thinking skills and hands-on learning.”

He left The Orchard School to move to northern England for two years with his partner, who was transferred there. They traveled to Paris, Poland, Spain and Amsterdam and went to London often. “I had never been on an airplane until I was 25 years old. As a kid who had never traveled outside the Indiana-Ohio-Kentucky area, that was a huge thing.”

Burch also became a full-time student, earning a degree in art at West Cheshire College. “I had always been interested in art, but didn’t have any experience. I took a couple of art classes in college and one of my art teachers said you should be an art major. I said you’re crazy, I can’t draw. She said art is a way of thinking, it’s not about drawing. I can teach you to draw, I can’t teach you to think.”

Next up was a move to North Carolina. Burch taught in Durham Public Schools for a year, then at Duke School for 10 years and has been at Durham Academy since 2011. He did a double-take when he visited what would become his classroom at the front of the second floor of the Lower School building.

“When I first moved to Durham, I was taking my dog to Colony Park Animal Hospital, driving my car down Pickett Road and this [Lower School] building was under construction. I said, that’s where I want to teach. When I came for the interview and Carolyn [Ronco] said this is the classroom, I remembered driving down there. … There are moments in my life when I think, ‘Is this really where I am? How did I end up here?’ ”

Burch is in his fifth year teaching at Durham Academy, and building community is an important part of his classroom. “It is really, really important to me as a teacher that students learn to acknowledge each other, to listen to each other, to work together, to say can you help me with this because I don’t understand or I can do this, let me show you how. It’s important to acknowledge when someone else does something really well. When you see it, say it.”