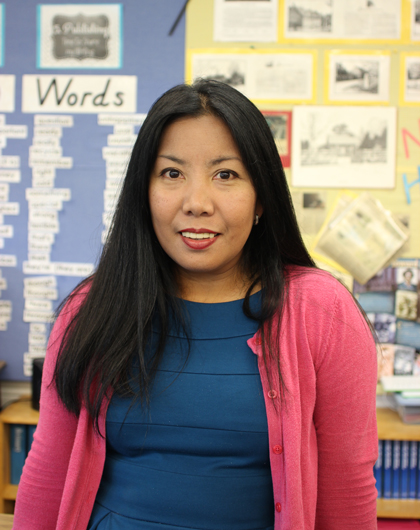 Jean Coene was just 3½ years old when she began attending a small preschool within walking distance of her home in suburban Manila. It was run by Jesuit nuns, and her teacher set Coene on a path that would be her life’s work.

“Sister Nilda was the first person I looked at and said, I want to do what she is doing. For the early ’70s these nuns really had, I guess for that time, a unique philosophy of education. They were very hands-on before the term hands-on was ever invented. The focus was a lot on experiential learning. … They would sit down and meet a child eye-to-eye when they spoke to the children. I remember it being fun and very, very engaging. You’d think you were playing but you were learning.”

The learning has never stopped for Coene, who came to Durham Academy in 2005 as a fourth-grade teacher.

She grew up in a small family in Manila, surrounded by a large extended family. “I have a brother who now lives in Chapel Hill. We both grew up going to private schools like Durham Academy. My father and mother were both Filipino. My father was a lawyer and became a judge eventually. We grew up in a family of readers and people who emphasized education.”

Coene’s work has always been geared toward children. When she was a teenager, she spent her summers tutoring. She graduated from the University of the Philippines at age 19 with a double major in psychology and early childhood education, and worked for a year as a university research assistant on a study that involved disadvantaged youths. 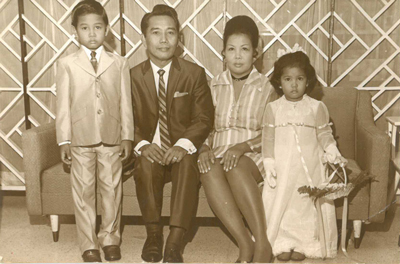 Her goal was to work with the Children’s Television Workshop — the nonprofit production company that created Sesame Street — in New York City. When that didn’t happen for her, Coene left the Philippines for Durham; members of her extended family had lived here since 1960, and her aunt was a physician at Duke University.

“It was a good landing spot for me, then after a month in Durham I moved to New York with the view to get work. I found out about an opening at a Catholic school in New Jersey, right outside of New York City, so that’s where I started to teach. I taught pre-k, third grade, sixth grade, a subject in seventh and finally I was offered the assistant principal position and was an eighth-grade teacher.”

Having grown up in the sprawling city of Manila, “New York was very appealing to me. It was at the same time familiar and to me, growing up in Asia, there was just a little bit of exotic to it. That’s why I was drawn to it, and the culture.”

Family brought Coene back to Durham. She took care of her mother, who was ill with cancer, and also worked with a program in UNC’s biology department that was creating a pipeline to elementary schools with the intention of getting minority students into science careers. She worked with the program less than a year when her mother’s condition worsened and she resigned to care for her full time.

“My mother worked, she was a COO of a dental supply firm, she sat on the board of a few companies and she was a role model, ahead of her time. I was surrounded by women who were very strong role models, who were not afraid to forge ahead and forge their way in the world. I was born in 1968 and these women, my mother, my aunts, were the pillars of the family. Filipinos are a very matriarchal society — that’s why it’s no surprise to me that the Philippines has had two female presidents while other countries have yet to elect their first. I grew up in that sort of environment.”

Coene was deeply affected by deaths in her family, losing a loved one in New York and taking care of her mother and then her father. “The losses I have suffered have shaped the way I relate to children and families. I see that people are fragile and lives change. People are infinitely interesting, you just need to know them and be kind and be compassionate.” 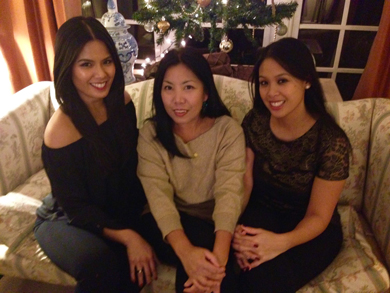 “After she passed, I decided to go back to elementary education, which was my first and only love.” She taught third grade at St. Mary’s Catholic School in Hillsborough for two years, and when that school closed, she accepted a job teaching at Durham Academy. Coene was already familiar with the school, as two cousins were DA graduates.

“My father used to say it doesn’t matter what you become. If you want to be a street sweeper, just make sure you are the best street sweeper there ever was.”

Coene took her father’s advice to heart. She is known as an excellent teacher who cares deeply about her students.

Coene even tries to learn the name of every child in the Lower School. “I’ve always felt walking down the hallway, if you say hi to a child and they say hi back, they will likely call you by your name and why shouldn’t I know theirs? These are little persons, they are people, they are individuals and if they know my name, I should know theirs.”

She likes teaching fourth-graders because “they are at the age where they still want to please the teacher, but they are at an age where they have interests and the ability to really get into different topics. It’s also the age where all of a sudden — especially with boys who were reluctant readers initially — it’s almost as if a switch gets flipped and they are readers. It’s fascinating to see them grow in those ways as readers and thinkers, so it’s a really neat age. I think they are ready developmentally for a lot of serious learning and they are able to see things many different ways, to analyze things. Not everything is just black-and-white, they are able to get more into nuance and gray areas. Discussions are always interesting with fourth-graders.” 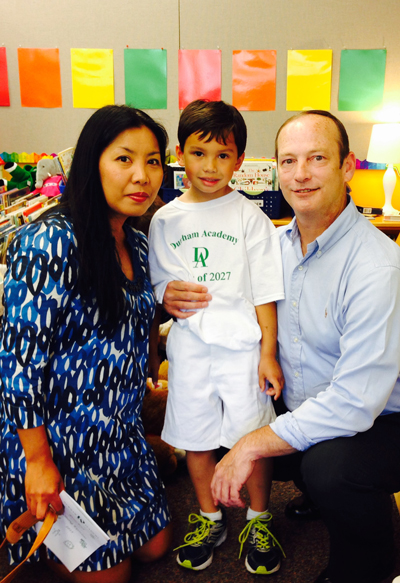 And when students leave her classroom in June and head to middle school, “I want them to know it’s all right to bring who you really are into any experience. … We spend the year setting up an environment in the classroom where kids can say what they feel and bring what they know and ask questions that they have without fear of being ridiculed or being thought less of. We always say if you say the wrong thing, it’s OK, that the walls don’t start crumbling and people don’t start staring at you and I make it clear that it’s not an all right thing to judge people. Hopefully they are able to feel they can be themselves and be respected, whatever they bring.”

Coene has always been child-centered, but becoming a mother caused her to see children in a new light. Coene and her husband, Courtland, are the parents of Cooper, a DA third-grader.

“Until I had Cooper, I kind of thought I knew what I was doing around children, understood children, but it was truly an eye-opening experience to have my own child. That infused a different perspective on how precious children are, that they are somebody else’s world. You see children in yet another light once you have your own children. You are trained as a teacher to individualize and to differentiate based on children’s learning styles. As a parent, you begin to understand the real uniqueness of each child, and that just brings a whole different perspective.”

Elementary education may have been Coene’s first love, but she leads a rich life outside the classroom cooking, gardening, knitting, meditating and spending time with friends.

“I can and preserve. It’s fun, and what else do I do with the stuff from my garden? I taught myself how to knit, how to can and preserve, and how to reupholster furniture. I have to be creative in some fashion. That is what fuels me, having a creative outlet. I can’t draw or paint to save my life, but I can make a good fig preserve.”

She loves teaching for the relationships she builds with students and their families.

“It’s the humanity of it that I really, really love. And I like that every year it’s a new start.

“It’s like tending a garden. Gardeners garden because it gives them something to hope for. Teachers get a new group of kids each year and it’s always a fresh start. I love that!”