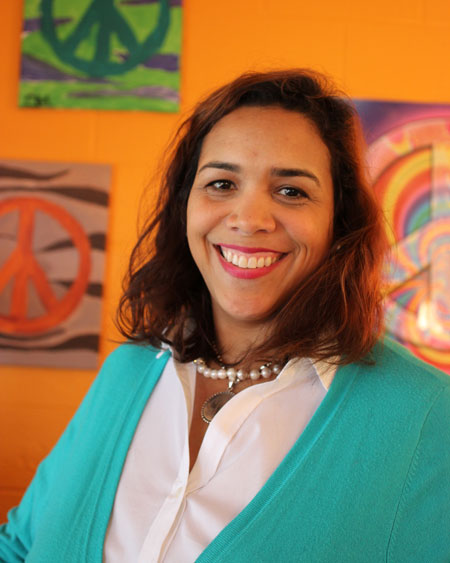 Cindy Moore never doubted that she wanted to work with kids. “I was always a babysitter. I was always the person that the adults in my life left in charge of kids. I always have loved kids, even when I was a kid. I knew that I wanted to do something related to kids. I think I actually knew that it was either a psychologist or a pediatrician, and I was afraid of medical school.”

Moore’s apprehension about going to medical school was medicine’s loss and Durham Academy’s gain. She pursued a career in psychology, earning bachelor’s and master’s degrees from N.C. Central University and a doctorate in school psychology from UNC-Chapel Hill, and came to Durham Academy in 2007 as the school’s first full-time learning specialist.

“The only thing I knew about Durham Academy at that time was that my godson [Xavier Nonez ’17] went to Durham Academy.” Moore attended college with Nonez’s mother, Kemi, who serves as DA’s Director of Diversity and Multicultural Affairs and Assistant Director of Enrollment Management and Admission, and “we've been friends since that time.”

It was Kemi Nonez, who began working at DA in 2009, who encouraged Moore to talk with then-headmaster Ed Costello about working at DA. For years, the school had contracted with learning specialists at The Hill Center, with several Hill faculty members spending about 10 percent of their time at Durham Academy. But the number of DA students needing services was increasing, and Costello told Moore the school needed a full-time learning specialist. “He said to me when we were talking about it, that basically we would be flying the plane and building the plane all the same because there had never been a learning specialist here, and I was totally fine with that.” Moore served the entire school until 2014, when Jennifer Rogers was hired to work with Middle Schoolers and Upper Schoolers as a learning specialist.

Moore began her psychology career in Durham, doing assessments of children from birth to age 5 for the state of North Carolina. “It was probably the smartest job for me to have at that point in my life because I was a part of a team. I worked with speech language therapists, an occupational therapist, physical therapist, social worker, pediatrician and psychologist, and we did interdisciplinary assessments. I learned so much about the whole child. And my mentor there was the person who told me that I needed to go back to school, that I needed to get my Ph.D.”

After completing coursework for her doctoral degree, Moore did a year-long internship with the Superior Court Child Guidance Clinic in the District of Columbia. “I did all court-appointed assessments — psych assessments, child custody assessments, therapy. I went into juvenile detention centers and did assessments on girls and boys. It was a lot of work, and it was really hard.” 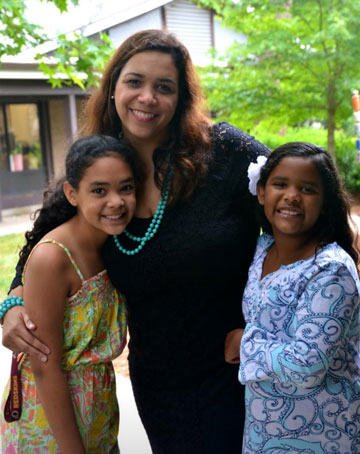 She came back to North Carolina, finished her dissertation and worked with the Chapel Hill nonprofit All Kinds of Minds and at UNC-Chapel Hill before joining DA.

Moore had attended public schools in the D.C. suburbs of Maryland’s Prince George’s County and “never thought about being at a private school in any way.” She considered working as a psychologist in the public schools, but thought she likely would be assigned to three public schools. “I really wanted to be in one place and feel a part of one place, and so in that way, Durham Academy was very, very appealing. I was nervous, obviously, because I knew in my mind what I thought DA was. The thought that they needed a learning specialist, I didn't know what that really meant. It took me a couple of years to kind of figure that out.”

Moore embraces her job as learning specialist for Preschool through Middle School.

“My whole goal is to get kids to be OK with who they are and be OK with the kind of learner they are, to be able to advocate for themselves and understand what they need, and to be OK if they don't do well on a test or if something's really hard. That's just what it is, and it doesn't define the kind of person that you are. And so that really, really is my goal, and to normalize it. I think that the [DA] culture doesn't feel like it did when I got here. I think that we have moved from that whatever-you-call-it and that makes me proud. I feel good about the fact that kids leave here [Middle School] and go to the Upper School and know that asking to be in a separate location for testing is something that benefits them. And I like that kids see this as a source of support for kids who have [learning] accommodations and for kids who don't have accommodations.

“The other thing that I really, really like about my job is that I get to watch a kid, who has been on my radar screen since they were in the first grade, go all the way through here. And that is what makes me cry when I go to an In The Pocket concert, stuff like that, and I see these kids. I know the path that they have come through, and then I see them on stage. It takes me down every time.

“I got a text from a girl who sat right here and cried many a day. I got a text from her not long ago with her college acceptance letter. And so that is why I love my job, and that is why I do it. She was just so shocked, and I remember she said, 'I am going to college.' To know that journey and to have been a part of it, it is an honor to watch them get to the other side.”

Moore also serves as Middle School diversity coordinator and is equally enthusiastic about that role. Moore is biracial, and attended schools where the student body was about 70 percent African American. She grew up in a diverse community that “leaned probably more towards African-Americans.” 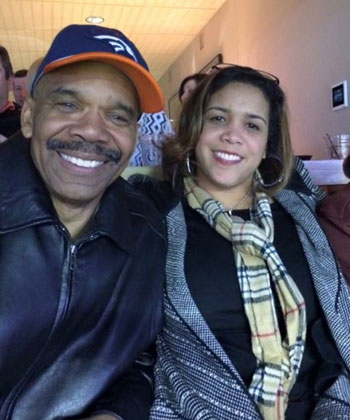 Moore’s parents divorced when she was 4. She is close with her mother and father, who both had careers as Washington, D.C., police officers, but lived with her dad and stepmother, a D.C. school teacher, for most of her childhood. Moore’s brothers were nine and 13 years younger.

Being biracial was challenging. “It took me a long time to figure out what that meant. As a youngster, I went through elementary school for two years being called a ‘zebra,’ and so that was hard because I didn't know, I needed somebody to tell me what was I?” Moore’s African-American stepmother, whom she refers to as ‘mom,’ “helped me figure it out because I was in this place of am I white, am I black, do I say both?

“I certainly felt more comfortable in a black environment. And I don't know why that was, but I felt at home. I felt like I had to do more work or I couldn't be my authentic self — whatever that was as a pre-teen — with my white family. And so the more conversations I had about that, I learned that on a piece of paper I can put whatever I want, but in the world people would not see me as white. If I chose that label or if I identify that for myself, that was fine, but she just wanted to make sure that I knew that was not how society would view me. And so that was very helpful, and I very much identified with being black. That just kind of sealed my deal, and then when I went to Central. … I needed that.”

For Moore, “growing up with two families that were very different, I lived it and it was hard. And then going to Central and then going to UNC, that was hard. And I didn't feel like I had to prove myself at Central. Nobody questioned who I was or where I came from. But it felt like that at Carolina. And so my dissertation was based on multicultural education, and if teachers were prepared for what their classrooms were getting ready to look like, and I worked on a research project called Walking the Walk. It was all based on diversity work. And so that's where all — besides my real life — that’s where the meat in the research, in the important pieces, I realized kind of all wove together.” 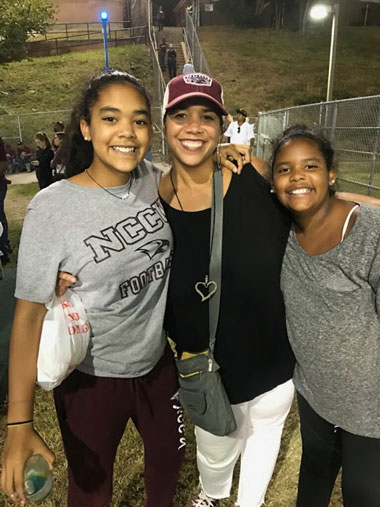 She believes the diversity work she does at Durham Academy “is challenging because it affects everybody, but everybody's not comfortable with it affecting everybody. People are in different places with their ability to have a conversation about it, their ability to see themselves in it, and so that piece is hard because I think it's really important.

“Kids have to leave here knowing how to do an algebraic equation, but they also have to leave here knowing why can't you say the ‘N word.’ I mean that's really important. But the thing they have to know is what privilege means, everyone, not just white. Every day, these are really important pieces of who we are and who they are. And if our job is to prepare them to be happy, moral and productive citizens, then that's a big piece of what we have to do. But not everybody is willing or able or comfortable, so the hard part is helping people on that journey.”

Moore is a single mom to Cece, an eighth-grader, and Camille, a sixth-grader. “I spend a lot of time with my kids. Right now, I like them a lot and they like me a lot, so I'm enjoying this ride, knowing that it can change at any moment. I love watching them play sports. … We love watching TV together. Right now, we're obsessed with This is Us, and we just finished Stranger Things. Those are things that we like to do together. I love crafts, so they indulge me and sometimes they're more excited than others. We bake a lot. We make a lot of cookies and a lot of cupcakes together. And now they're big shoppers, so they have become a little bit more expensive than they were a couple years ago. I'm very close to my kids and we do a lot of stuff together and we talk about a lot of stuff, a lot of topics. Right now, I'm just honored that they will let me in that way. Who knows when it will go away?”

She is a strong believer in girl power and is involved with StrongerHER TogetHER, a Durham-based nonprofit that aims to bring together girls who share a heart for forward progress, acceptance and most of all, each other. Moore serves on the organization’s board, led a StrongerHER TogetHER camp at DA Summer Programs, and believes in “enforcing how important women and girls’ relationships are to each other.”

Female friendships are a huge part of Moore’s life. “I have really good girlfriends, and I TREASURE — and I say that with capital letters — my time with them. If I were to offer any advice … it is to make sure you have yourself some good girlfriends. It helps me be a better person, a better mom, a better everything. You need good, authentic girlfriends.”