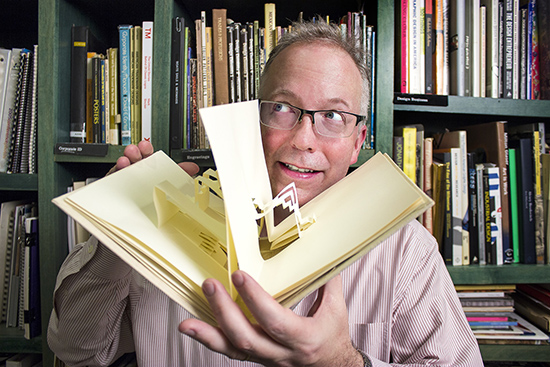 Graphic designer Alexander Isley ’80 says DA taught him everything he needed to know about learning how to learn, and everything after that was just fine-tuning and polishing. “Learning has never been quite as fun for me since.”

Isley, a 1990 recipient of Durham Academy’s Distinguished Alumni Award, has been awarded the design industry’s highest honor, the AIGA medal; the Art Directors Club Herb Lubalin Award; the National Endowment for the Arts International Design Education Fellowship; and the Federal Design Achievement Award. A Graphic Design USA magazine readers' poll listed him as one of the most influential designers of the past 50 years.

Isley's work is of particular significance to the Durham Academy community, as he is responsible for the current interlocking DA logo, which was unveiled in 1998, the new DA Summer Programs logo and the "DA 2030" design used on the cover of the summer 2016 DA Magazine. He also created the last two DA admissions viewbooks, including the most recent design, “Durham Academy: A Closer Look”, and was responsible for graphic designs for DA’s Evergreen Campaign. 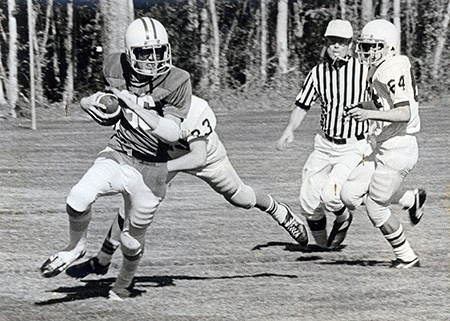 A — I attended DA from first through ninth grade. I then went on to Jordan High School, where on college day my junior year I visited the table for the N.C. School of the Arts and I discovered they had a residential high school visual arts program! I was off to Winston-Salem for my senior year so fast it would make your head spin. I know it did my parents’.

I graduated with a degree in Environmental Design from N.C. State University and went on to get a BFA from The Cooper Union in New York City. I thought I’d live there a year or two and then move to someplace normal, but I stayed in N.Y.C. for 13 years. I worked at design studios and ad agencies, then was hired as the art director of SPY, a satirical magazine. I founded my own design firm in 1988, when I was 26. I’d been saving up to do this starting when I was in college.

Along the way, I was lucky enough to marry Veronica Burke, and we moved from N.Y.C. to Ridgefield, Connecticut. We have three kids: our son, Owen, is a sophomore at the University of Rochester, and our daughters, Ruby and Ella, are in high school.

A — At the same time we moved our home, we also moved our office to a barn in Redding, Connecticut. I’d always wanted to work in a barn, and there were none to be found on lower Broadway.

Today I continue to run my design company. It’s called Alexander Isley Inc. — I figured if I came up with a clever name I’d be absolutely sick of it in three weeks’ time. This is the same reason I have no tattoos.

I have a short attention span and like juggling many things at once. Right now, I’m doing a lot of work with libraries — along with a few things for DA, too.

A — I absolutely love what I do. People come to me with problems, and my job is to solve them in engaging ways that haven’t been done before.

Design is a mixture of art and business, and a successful solution requires the combination of imagination, knowledge, persuasiveness, ambition, confidence, trust, artistry and luck (not always in that order). And I get paid to learn! 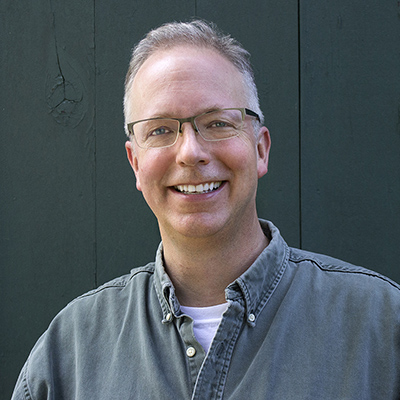 A — Harriet King [former Upper School English teacher] showed me by example the value of a nimble mind, and how by writing precisely one could get people to laugh with you, not at you.

Bobbie Hardaker [former Upper School science teacher] taught me the importance of curiosity and having a generous spirit. She also trusted me to design a snake cage for the science lab. And she trusted me again, encouraging me to reconsider my design after the snake escaped.

Margaret Woods [former Lower School teacher and school director] taught me what “errors” were, and that they should be avoided. I was halfway through second grade before I realized she wasn’t talking about arrows. Up to that point I’d been avoiding the wrong thing.

This is nothing against the other schools and colleges I attended, but everything I needed to know about learning how to learn, I got at DA from those educators and their life-changing colleagues. Everything after that point was just fine-tuning and polishing. Learning has never been quite as fun for me since.

A — If to be successful a man needs a good job, a good hobby and a good sport, then I’m a failure because mine are all the same thing.

A — I know what I’ll be doing for the next three months, but past that I have absolutely no idea. That’s the way it’s always been for me, which is exhilarating but also kind of terrifying. I’m now coming to see this interview as a cry for help.